There is a world of old houses on winding streets that wends its way behind Franklin up in Hollywood. I was there yesterday to assist a photographer in styling a shoot with a male model.

I am a photographer myself, but have worked in the fashion industry and love clothing. So my photographer friend and I went shopping on Saturday, down at the Beverly Center, and pulled together handsome wool sweaters, tight plaid pants, exquisitely tailored dress shirts, artful caps, and patterned scarves.

The location was his home: a 1925 Spanish style house with high ceilings, wood beams, and a warren of rooms, balconies, green tiled bathroom; art deco, sunlit and ornate, overlooking the south-facing brightness of Hollywood.

The photographer possessed a fine and expensive array of lights, various strobes, reflectors, electrical voltage devices, screens, flashes, lenses. Expensive illumination I could only dream of.

Around 10am, a young, tall, lean, polite blond man with close-cropped hair showed up. He reminded me of Brad Pitt. He had a slight twang. I asked him where he was from and he said, “Springfield, MO, Sir.” And it turned out he was from Pitt’s same town. “My mom and Brad went to high school together,” he said.

The model talked, as many do, about his busy life.

Suddenly, he was actor, not just a model, and getting parts in various shows. No college for him. He just got in his car and drove to LA and stuff started happenin’. He had a girl, also a model, and she was makin’ lots of money. Good stuff.

We two men, photographer and stylist: bruised, jaded, wiser, middle-aged; heard it from him and hoped it was true. The trajectory of success, the dream of making it, the hope of security, the lure of fame, the imagined life ahead: anything can happen at 23.

I had laid out the various looks and set about getting him into the clothes.

There is only one moment in our lives when we are young, and we do our best to rush through it, blithely unaware and carelessly ignorant of its temporal nature.

So with my admiration and envy, the tall, thin, agile man with the smooth face, metal dog tag, shaved chest and icy blue eyes, slipped into a spread-collared Tattersall shirt, wool tie, blue cardigan, driving cap, brown cords. And then he stepped in front of the camera, while 100 flashes of strobe and lens captured his every microsecond of movement.

What followed were his transformations into Klub Kid, English School Boy, American Prep Student, and something that looked like gay Berlin with black combat boots and a high-waisted, tummy tucking, black spandex underwear get-up.

A few hours later, I left the house.

It was a Sunday: cool, clear, crisp, with rain-washed air.

I had been working in a Bruce Weber/Paul Jasmin photographic fantasy inside the house. And now I was living one outside. (contd.) 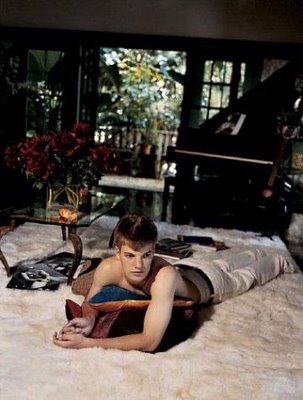 Years ago, Paul Jasmin shot some gorgeous photos inside the home of designer Kevin Haley. As I remember it, the house was somewhere in this same neighborhood. A book, Lost Angels, showed a young man on a white rug in the Haley home. There were other photographs in a room of Chinese painted wallpaper, and romanticized young men and women in front of bamboo gardens.

And I had wanted, so badly, to get inside that house, the same way I had imagined that walking up to 1164 Morning Glory Circle might lead me into the Darrin Stephen’s home and into Samantha’s kitchen.

But those are fantasies, illusions– idiotic tricks—which our media and movie saturated minds play on visitors and residents of Los Angeles.

I think I had once sent a card, the kind with a postage stamp, delivered by a postman to a mailbox, addressed to the famed designer on Pinehurst Road. I wrote him that I admired his work. I had hoped to be invited inside. But he never responded.

“Open House, Sunday 1-4” read the sign at the bottom of Pinehurst Road.

Could this be the Haley House? I walked up the road.

And like some wonderful moment from “Miracle on 34th Street”, the one where Chris Kringle left his cane inside a Cape Cod house destined to be the future home of a young Natalie Wood, the cane was left at my door and the Haley House was for sale ($999,000), and the front gate was open.

I walked up the stairs. On my left, the same shaded garden with the bamboo.

There were two levels to the house, and on the lower level, rentable apartments with old-fashioned casement windows, 1940 stoves, painted in bright colors. I walked in and said, “Hello” but nobody answered.

And then I realized that there was a second floor, and up I walked, and entered into the house where a realtor sat, glumly, looking at his laptop and muttering a tired hello to someone who didn’t matter to him.

But I didn’t care. Because there, in front of me, was the dining room with turquoise painted Chinese wallpaper and the blue woodwork. Just like the photograph! The white, fluffy area rug sat in the middle of the living room, just as it had in Paul Jasmin’s picture, absent the shirtless young man.

I had, maddeningly, left my own camera in the trunk of my car, not knowing that I would soon walk inside a photograph and tour a fantasy that existed for me only inside a book.

It was only one Sunday in Los Angeles, somewhere in Hollywood, up in the hills, but I saw enough beauty yesterday to keep me awake, long into the night.