A few months ago, I walked into a Santa Monica dry spice store that my friend and I had dismissed a few years earlier.

It seemed ridiculous to us, that people, in the farm-fresh and organic era, would buy dried spices and spice blends at premium prices, and also waste money inside a store where the edibles sat in glass bottles in the burning Western window sun, becoming milder, less fragrant and more tasteless by the day.

Yet the business lived on, as culinary mediocrity often does in Los Angeles, eventually thriving in its insipid rendition of gourmet flavoring for chef lite hacks.

But then I came back into the spice store a few weeks back. I gave it another try. Maybe I was wrong.

I bought something called Northwoods Spice: salt, black pepper, paprika, thyme, rosemary and garlic, which the company describes as perfect for chicken or fish.

It cost about $13 for seven ounces. And I used it once or twice with no noticeable or discernible improvement in my food. In fact, the food had come out worse with the addition of the Northwoods Spices, giving baked chicken the flavor of something my mom might have cooked in 1975 Lincolnwood, IL served with Uncle Ben’s rice and creamed corn.

Today, that company sent out an email with an entirely different agenda. They were giving away either a magnet or a cookbook called LOVE PEOPLE with any $10 purchase. 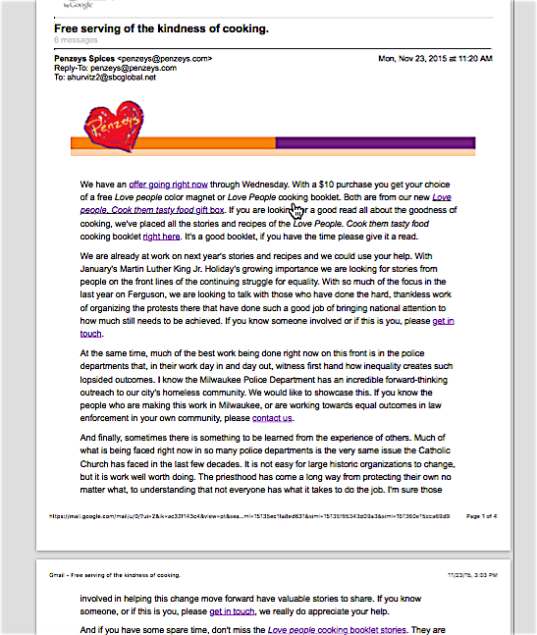 Further down the email, the owner and alleged author of the email, Bill, talked up his support for “people on the front lines of the continuing struggle for equality.”

Who, really, are the “people on the front lines of equality?”

To some they are students screaming to take down President Woodrow Wilson’s name at Princeton University. To others, like me, equality is often accomplished in a quiet or modulated voice: teaching, reading, praying, thinking, writing, to postulate ideas and reform minds, and argue, through logic and insight, for the reform of certain societal inequities such as equal pay for women and men.

The mob, screaming and tearing up for You-Tube, is the curse of our time. The Arab Spring, so liberating online, has burned up in the Saharan sands and splattered blood from Jerusalem to Paris to Mali. Millions protest. But not one speaks freely.

But, here in America, The Spice Man speaks freely.

He tied in the struggle for equal rights to the strange events in Ferguson, MO, where, in 2014, Darren Wilson, a police officer, shot to death Michael Brown, a black man who had just robbed a store and roughed up its owner.

A grand jury later decided not to prosecute Officer Wilson. And rioting followed after this legal decision.

So why bring this tragic event into a way of advertising your spices? The killing was an epic event, a turn of racial history, an explosion of anger, an invocation for rioting, an example of passion gone amok. To employ this police/pigmentation tale of violence to market spices reduces its enormity to triviality, and grounds it down into mere cocoa powder.

The seller of garlic powder, turmeric and thyme, whose exposure to worldwide aromatics evidently endows him with insight into all senses of the human condition, then compared police reform to Catholic priesthood reform, linking the two institutions, which have no relation or logical connection, but obsequiously praising The Catholics and The Cops for “coming a long way from protecting their own no matter what, to understanding that not everyone has what it takes to do the job.” Perhaps The Spice Man and his unessential oils belong in the latter category.

A scandal about police brutality, a scandal about child abuse, and now (to my mind) a scandal of a salt salesman using the most controversial and unsettled issues of our time to push his product.

Bill’s presumptuousness, his wise ignorance of imagining that his clientele shares his views on the proper role of police, on racial profiling, on police tactics, on law enforcement-all of it- sickened me because it used sensitive and philosophically critical issues in the service of selling spices.

In this strange marketing email, he also praised the Milwaukee police department for “an incredible forward-thinking outreach to our city’s homeless community.” In old America, before the 1980s, the police arrested people sleeping on the streets, not only because it was illegal, but also because it was unsanitary and unsafe. And gutters, park benches, alleys and dumpsters were deemed not fit for human habitation.

Strangely, there are still people, (like me) who think that there should be a law against allowing people to set up home on the sidewalk. Tolerance of it allows it to grow and become a movement of its own, normalizing the cruelty and barbarism of it, and giving a free pass to liberals to walk from their Range Rover with the handicap sticker on it, right into Studio City Lululemon on Ventura Boulevard, past the old lady who has slept on the metro bench for six months.

So now the police, as cited in Milwaukee, are expected to be the ambassadors of graciousness to the mentally ill, and to people made mentally ill by living outdoors in urban filth.

But back to The Spice Man.

He ought to make a better product before he jumps ahead to planetary reform.

Spices, kept out for too long, lose their potency, like old bromides. 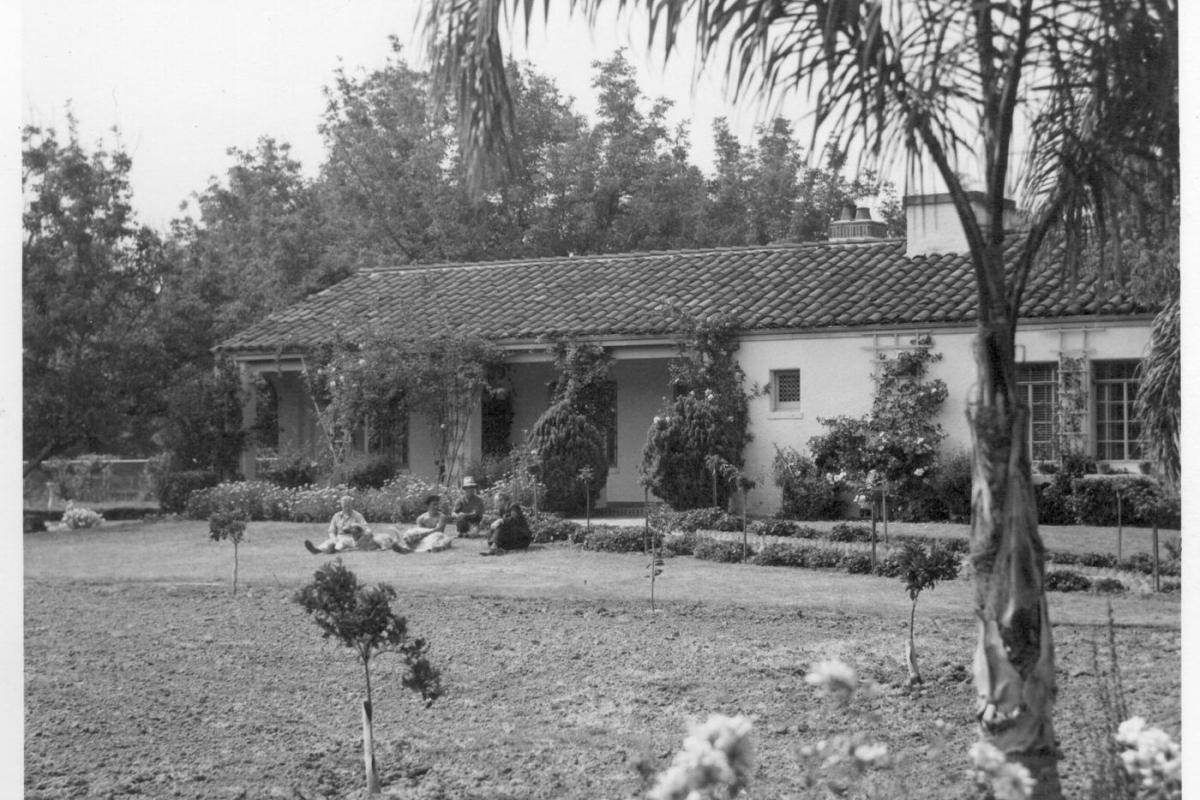 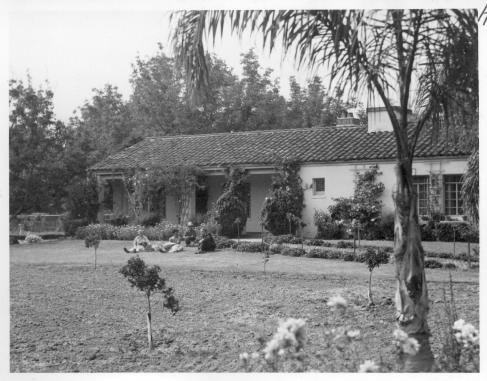 “This is the main dwelling on the beautiful walnut grove estate of Dr. Sidney Walker, 17367 Parthenia Street, Northridge, in the San Fernando Valley.

Dr. Walker has employed Yokichi Oyakawa, his son, Evan, and his daughter, Lily, who left Heart Mountain [internment camp] the end of February. Walker is a retired eye surgeon from Chicago and a veteran of World War I.

He is a real champion of the Japanese Americans and will go to bat with anybody and everybody who would deny evacuees the right to return to their homes. He is enthusiastic in his praise of the Oyakawas and allows them practically all the privileges of his estate even to the use of his beautiful swimming pool. Oyakawa is head gardener and his son, Evan, helps when not attending classes at UCLA, where he is a student. The daughter, Lily, holds the position of maid. The family occupies their own modern home just a few yards from that of the doctor and his wife. — Photographer: Mace, Charles E. — Northridge, California. 6/2/45

Suddenly, the cat is out of the bag and people are looking at those who oppose Obama and asking if the dislike of the President is formed out of racial animosity.

To an observer and historian of American history, the question should really be asked: What issues in our nation are not tinged by racial prejudice?

Obama is half white, but in this nation, that means he is all black. He married a black woman, and they joined a majority black church and lived and worked among working class black Chicagoans. Obama never lived post-racially but joined the very race based world of South Side Chicagoland.

Despite his immersion in South Side politics, Obama has tried and nearly succeeded in making white people forget that the history of America is as much about the exclusion of darker skin as it about the inclusion of everyone else. For the last two years, the liberal “elite”, if there is such a class, has pronounced, from its well-to-do white habitat, that we are a “post-racial” nation. We are not, and never will be that country.

Who among us, if given a choice, would rather have a black complexion? Who would choose to live in a mostly black neighborhood if they could live anywhere? We are lying if we say that we want to make our life harder. Anyone with common sense would like things to be easier: economically, socially, and racially.

If some sleeping liberals now detect that hostility to Obama stems from some hidden bigotry, they might realize that hatred of the man and his policies all share a common thread, however insignificant: race and color will always inform our policies.

Race and class are sitting in the debate room on issues as small as the renaming of a part of Van Nuys as Sherman Oaks; and as large, invisible spectators in the national tragedy of why we have spent 2 trillion dollars in Iraq rather than rebuilding Detroit, Newark, and Camden, NJ.

(Note : If you wish a print of this image, follow the following link and click on “Buy This Print” : benheine.deviantart.com/art/Obama-Luther-King-81753252 thanks)
</p