“Gosh Darn it, I Know How to Solve Our Problems” 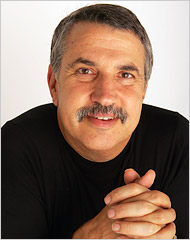 Gosh Darn it, I Know How to Solve Our Problems

“If nobody in government does something than somebody else will”

My buddy, Jay Rock, who works in the Pentagon, and knows folks at the IMF, is frustrated. Because our country is oil dependent. Because our nation is increasingly worried about President Obama and the fiancial meltdown and the convergence of crises around the globe from Australia to New Zealand. Because the Middle East cannot wait another day. Oil, terrorism, poison gas, death, weapons of mass destruction. It’s time to get serious and if I were in the Oval Office I would just shake President Obama by the collar and say, “Hey, Mr. President! Listen to me! I’m Tom Friedman and I know what is going on!”

We knew what was happening when President Kennedy was assassinated. The US was respected and the world respected US. Then came Vietnam, Watergate, Three Mile Island, Dynasty, Dallas, Knots Landing and the Clintons. Monica Lewinsky and Brad Pitt and Jennifer Anniston and the BP Oil Spill. I went online in 2002 and saw the writing on the screen and knew the interconnected dictatorships whose Islamic radicalism was no match for the seemingly confounding intervention in the Balkans. If we didn’t know then what we know now, how could we citizens, the greatest citizens in the world, crawl out of this crisis and get our handle on global warming?

The oil spill gets worse everyday and yet we sit and fiddle and do not get moving on the number one issue that may drive our nation into poverty, obscurity, powerlessness and pettiness. The mean-spirited, overly-cautious, under-invested, top-rated, and low-ball estimates of trying to change. Change is here. Change is now. And we have to change or change will change us.

This unedited column was written in 20 minutes, while sitting on the toilet.