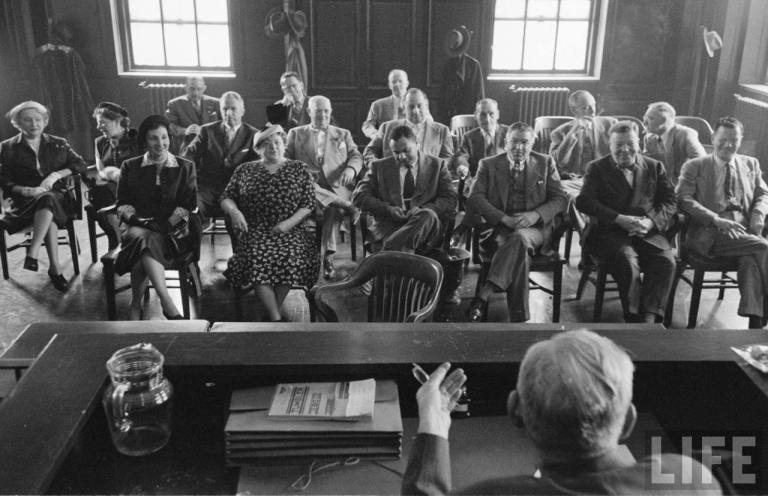 For the past four days, I served on a jury for a civil trial held in the Los Angeles Superior Court downtown.

I am always nervous about anything to do with courts, or cops, or the law.

I made my usual, environmentally correct decision to take the Orange Line to the Red Line train and enter downtown Los Angeles the way most inhabitants of any other city around the world go into the center.

LA, by train reminds me of those days, long ago, when I rode the IRT and BMT and IND around New York, and sat next to, and stood next to, urbanites of all ages, races, and incomes.

The trains are much less crowded in this city, but they are also browner, poorer and younger than the lines that run underneath the Big Apple. Our riders are often students, or medical workers, or immigrants with babies, shopping bags and wired ears. We don’t have many Wall Street types riding down to work.

The Superior Court Building, where I reported to, is a block long structure of appalling monotony and unimaginative design with hallways of mausoleum tinted marble illuminated by unending straight strips of ceiling fluorescence. Built in 1958, it seems to have been designed by a somnambulistic Stalin.

Potential jurors wait in a long line outside, then pass through the usual metal detectors and into a large, second-floor, blue seat upholstered waiting room where a woman explains the glories, the duties and the obligations of service.

Before long, I was taken out of the room and led into a courtroom where two attorneys interviewed potential jurors and then spit out those who were not deemed useful. I was picked, and then sent out on an hour and a half lunch.

I love downtown, or should I say, I am exhilarated walking around the city streets.

I ran down to the Grand Central Market and soon struck up a conversation with a fellow juror who became a bud for the next few days.

My case involved a woman and her three adult children who live in an income qualified apartment building where the management certifies tenant finances annually. She was being evicted, on the grounds that she had violated her lease by lying and doing other things that disqualified her from renting there.

I was ready to see the witnesses as clichés but there they were, humans, caught up in stupid system of management and tenant, worker and unemployed, rule maker and rule breaker.

The defendants were an immigrant 52-year-old single mother with a 21-year-old daughter who already had two children, one 7, another newly born. A teenage boy, testified, admitting that he used drugs. Another son worked for a restaurant. And they were given a thirty-day notice to quit, to get out of their apartment of the last ten years.

I learned that there are apartments, numbering in the tens of thousands in Los Angeles, where private companies are subsidized by the Federal Government to offer low cost housing for families. And these companies employ, mostly women, often poor, overweight and Spanish speaking managers, who must account to their bosses for every private and financial dealings of their tenants. Nothing is proprietary when one is recertifying to the management. If you are pregnant, if you go to school, if you are moving out, if you work, you must tell the building manager.

And this family: struggling, fatherless, low-income; was in court, to protect and fight for their place of residence and to refute the management company’s claim that they had failed to play by the rules of their lease agreement.

The prosecuting attorney was sharp, organized and well-armed with the facts. The defendant’s attorney was young, slickly dressed and stammering.

Yet we jurors, disparate, unalike, strangers; we gathered in the windowless room around the rectangular table and discussed with humor, civility and curiosity, the facts of the case and concluded that they did not warrant an eviction. The family could stay.

There is a lot that is wrong with America and sitting here, as I usually do, in front of a computer, in my house, listening to NPR, I tend to forget that there is another world out there, a place of beating hearts, and stamping feet and speeding trains, a place that mailed me a jury notice and demanded my attendance so that I could be an actor in a legal and family drama already cast.

I felt part of something bigger…. and dare I say… proud to be an American.