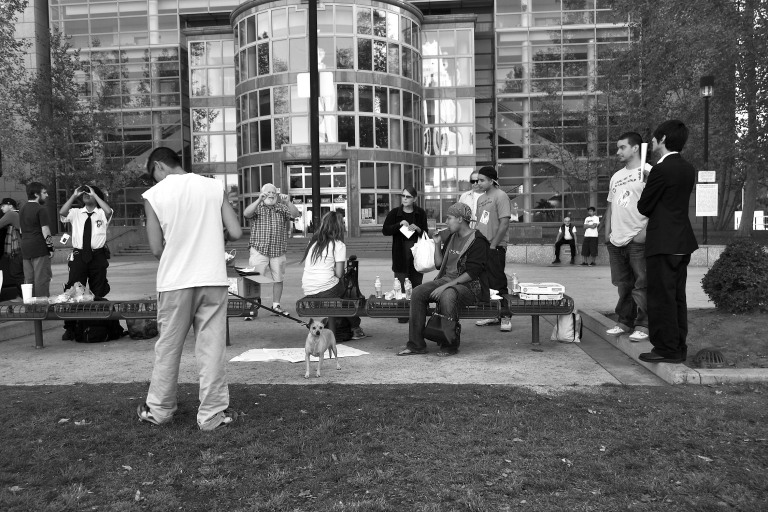 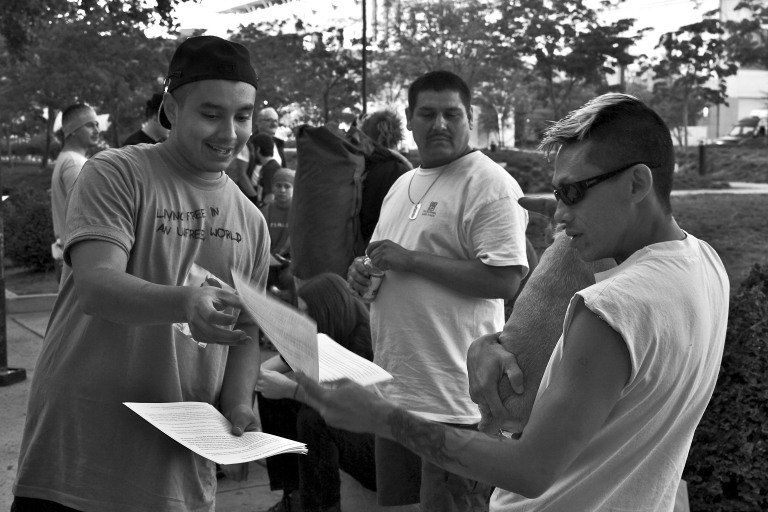 When I first heard that the burgeoning “Occupy” movement was moving into Van Nuys, and they were planning on pitching their tents behind the Marvin Braude Center, on the lawn of the Civic Center, under the piercing tower of the Valley Municipal Building, I must admit I got excited.

I imagined hundreds of young, yelling, incensed, angry, articulate, fertile, bearded and long-haired, tattooed men and women carrying protest signs, arguing with the cops and pointing fingers at authority; and then at sunset, when the grounds were closed, an enormous phalanx of armed LAPD officers, moving forward–on tanks, horses and siren-mounted, armor-clad bicycles– pushing and smashing and trampling the sleeping bags; blasting fire hoses full of water, setting loose ferocious and fanged German Shepherds tearing and ripping at running denim derrieres. The helicopters would churn up the air above, while on the dusty ground, cameras from every international news organization, and bloggers from every laptop, would record the brave and terrified OCCUPIERS fighting to stay their ground! To voice up for the voiceless and power up for the powerless and prove to the world…. once and for all…. that our great nation is doing something… something so terribly wrong! Because only one percent have everything and ninety-nine percent have nearly nothing! 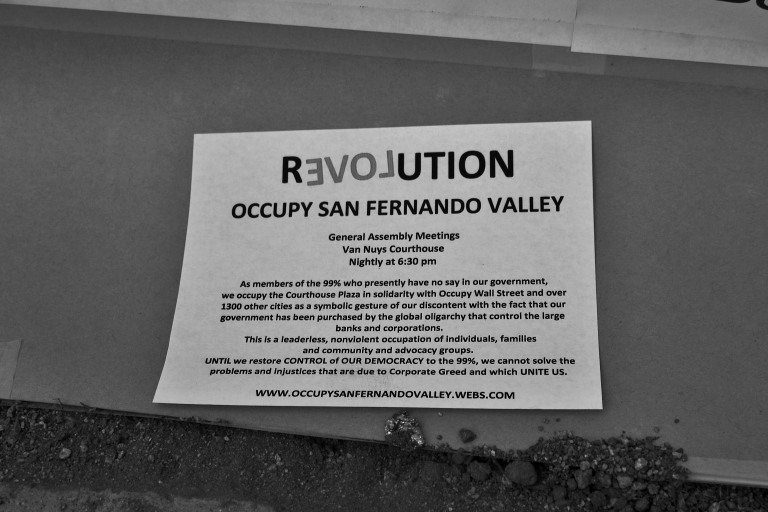 But at five o’clock yesterday afternoon, Van Nuys looked as Van Nuys always does: dead under the sun.

There was lots of street parking on Sylvan Street, next to the Civic Center, and it was free (my apologies to Donald C. Shoup). 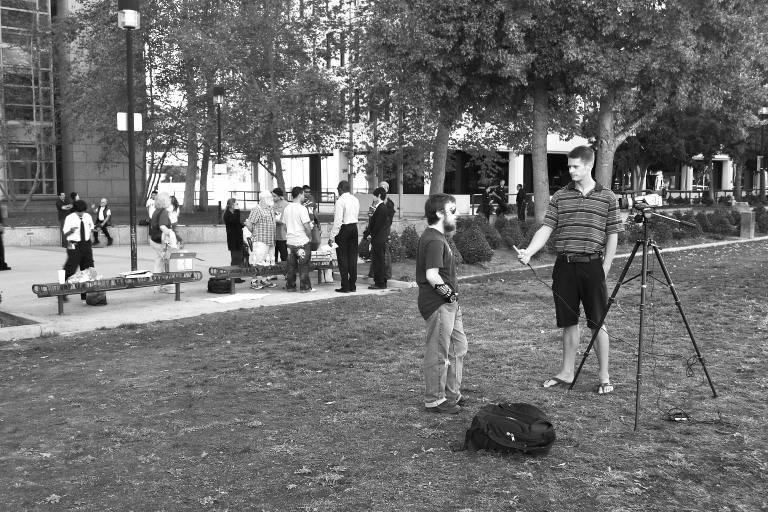 On the mall, behind the Valley Municipal Building, were gathered a college cameraman, tripod and video, interviewing a man. Perhaps a dozen people with a few signs were standing and chatting. 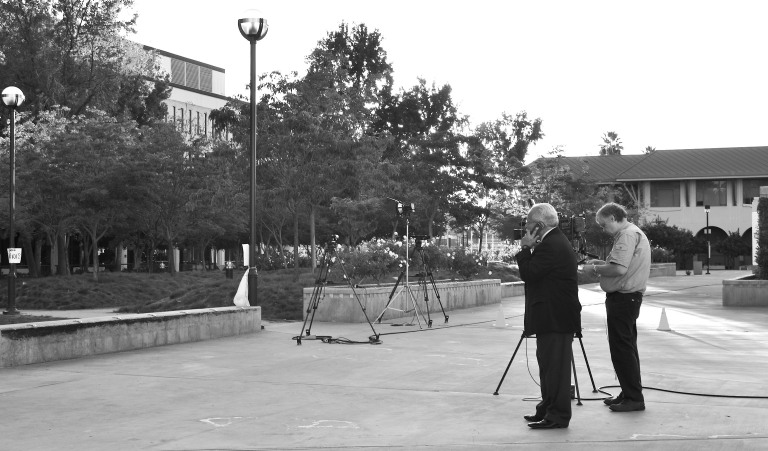 KTLA and KNBC news trucks were parked far away, their new technology and old reporters, ready to capture the non-event that was about to not happen. 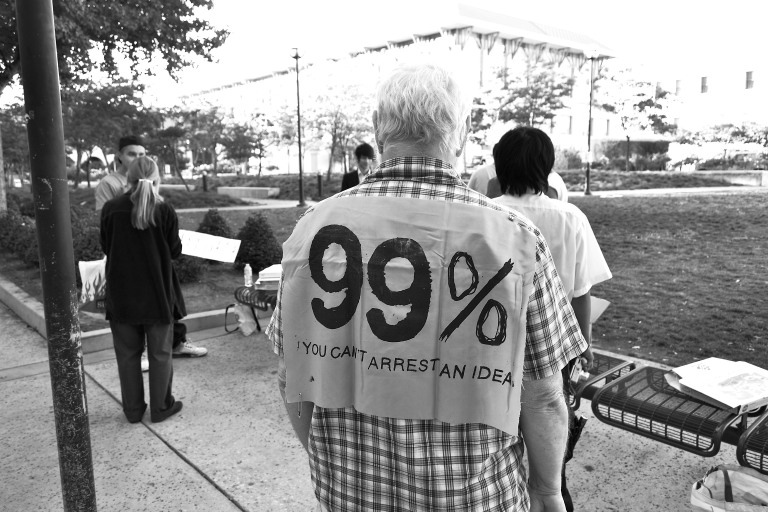 And outnumbering the protesters, or the complainers or whatever or whomever they were; many navy shirted cops, standing on foot and on bike, looking bored and aimless and tired. The cops had been hyped up, no doubt, and sent out, no doubt, to fight and protect these hallowed homeless grounds from the invasive anti-Wall Street crowd whose lament has yet to be fully understood or properly articulated. 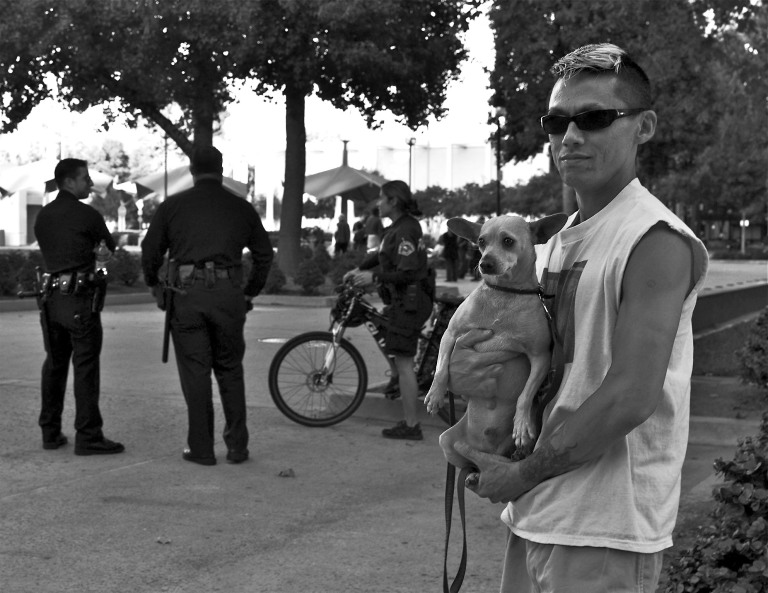 I was adjusting my camera when a tiny man carrying a tiny dog walked up. He handed me a sheet of protest music and introduced himself as “Man Goo-Goo”.

Man Goo-Goo is a musician and he will be appearing at Paladino’s next week where he will perform something, possibly musical or perhaps vocal, I could not ascertain.

His name, as he explained, is a derivation of Lady-Gaga.

There was not much to photograph besides Man Goo-Goo, so I left the strangely deflated protest and walked back to my car on quiet and unpeopled Sylvan Avenue.

Occupy Van Nuys has some noble aims, but when it came to Van Nuys, it unfortunately confronted something much larger than the inequity of wealth and the corruption of politics.

For Van Nuys itself has an almost mystical ability to destroy anything worthwhile, be it aesthetic, intellectual, commercial, developmental or progressive.

Under the hot sun, baked in acidic air, crowded with illegal occupiers; Van Nuys is anti-nature, for it does not abhor a vacuum, it creates one. These protesters, yearning for freedom and fresh air, had unwittingly entered a toxic and sulphurous environment of suffocation. Civic life died long ago in the atrophied heart of the San Fernando Valley. And these young hearted protesters had encamped, near dusk, in a dead twilight zone.

This is the town where a few months ago, dozens of lovely, mature Pepper trees were chopped down in front of the East Valley Animal Shelter so large posters could be seen advertising animal adoptions. New trees have since been planted to replace those inexplicably butchered.

And in a new “Only in Van Nuys” development more nature was killed recently near the intersection of Van Nuys Boulevard and Burbank.

The powers that be have torn out the ornamental grasses and agave that beautified the wide nothingness of the street, and they are now laying down sheets of astro-turf. Yes, the meridian in the middle, the only sign of nature amidst the car dealerships, will now have new artificial grass where living plants once thrived.

5 thoughts on “With Man Goo Goo at Occupy Van Nuys”