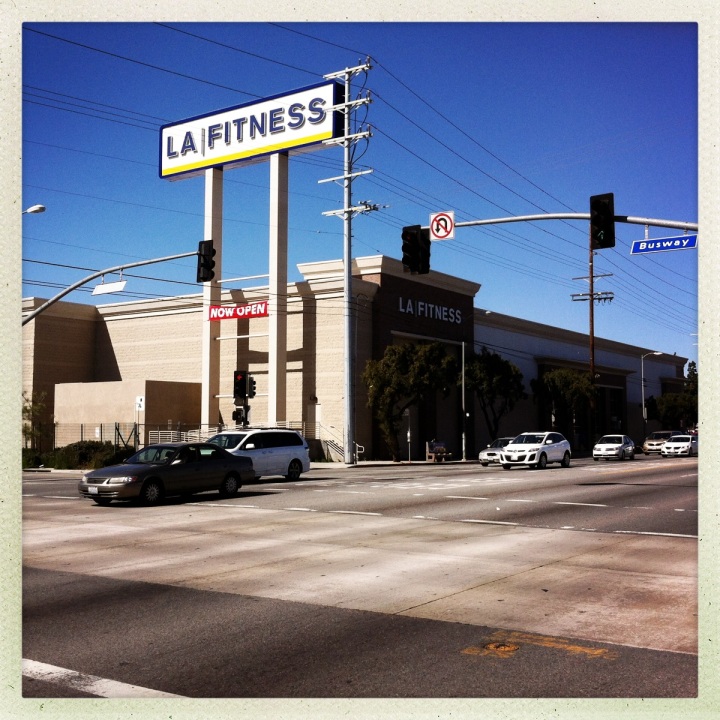 Civilization, as it is known to exist in Van Nuys, marched north on Sepulveda, and has now crossed Oxnard.

Occupying the very spot where couch potatoes worshipped, Wickes Furniture, the new gym promises to bring an active lifestyle to an area where the Gluteus Maximus is almost extinct, and 16-year-old girls are considered anorexic at 300 pounds.

Bow-fronted, brown, low, and wide, the corporate architecture echoes its clientele. Doors open graciously, in the LA way, onto a wide parking lot, around which spin the orbiting stars of Wendy’s, Costco, Fatburger, CVS and Star Kitchen.

The new building turns its back away from the Metro Orange Line Busway. The Bus Rider and The Pedestrian will have to take the long walk around the north side of the building and enter through the parking lot side. Clearly this structure was designed somewhere in Texas, possibly by someone unfamiliar with Google Maps.

This morning I took an unguided tour of the interior which begins with a pool, an iconic symbol of sunny Southern California, placed indoors at the shady and dark NW corner, near the check-in, with many windows open to viewing for arriving and departing members. The wet old man in the Speedo will be the first image implanted on future arrivals.

But the equipment is, to use a reality TV word, amazing. There are dozens of aerobic machines, now equipped with iphone ready TV screens, so that sweat and heavy breathing can keep an eye and ear on Bill Reilly and Anderson Cooper.

Assembled like a marching army regiment are treadmills, bikes, weight machines, free weights, racquetball courts, and the most important feature of all: walls of mirrors.

For now the glory is in the opening.

The carpeting is new, the paint is fresh, we are older but our gym is newer, and if we go here everyday, and eat healthy, we may live out the rest of our lives here in Van Nuys.

3 thoughts on “Advancing North: The Treadmill of Civilization”