West of the 405, on Victory and on Vanowen, the vast spaces of Van Nuys open up to parks, golf courses, airport runways, and planes taking off and coming down. The skies are bigger, the vistas wider, the winds windier. And the potential for escape and discovery beckons on foot or bike.

Once this area was the domain of the Joe Jue Clan, a Chinese-American family whose large asparagus farm, near Vanowen and White Oak, flourished from the 1920s-50s. Surrounded by tennis courts, the old family barn still stands.

Curious, I returned last night, near dusk, with Andreas Samson, and explored the teeming urban apartments and semi-rural side streets along Vanowen, Gloria and Gaviota. And we stopped to investigate 15931. (built 1947)

Van Nuys, or Lake Balboa, as this area prefers to call itself, is deceptive. Along the main streets, the apartments are packed, full of working Latino families, the backbone of California. Last night we bumped into an old friend from the gym, a Guatemalan guy on Gaviota who owns a restaurant on Sepulveda and was returning home, in his pickup, exhausted.

Along the side streets, an old world still co-exists with the newer slum dwellers. There are large, deep, expansive properties, many planted with citrus trees, up and behind fences and gates, behind iron. Armenians, Latinos, and Asians bought up these fortified compounds, built up houses and rental units, or let the dry grasses and dirt take over. 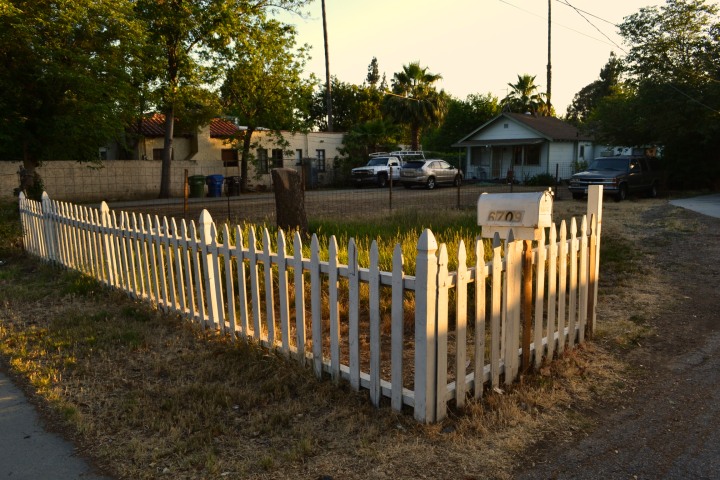 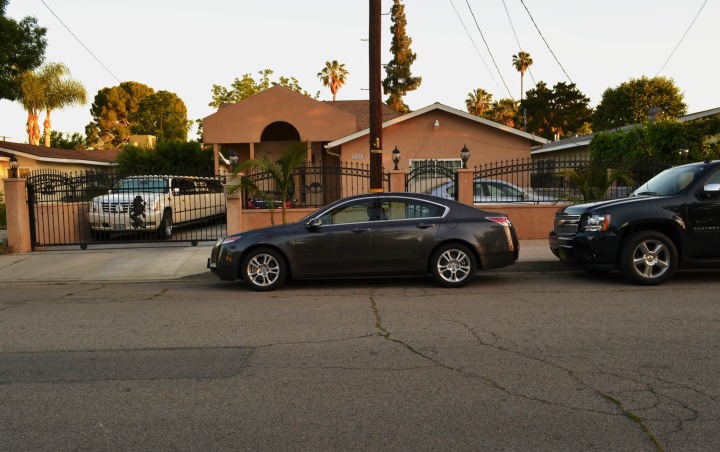 Contrasts are everywhere: the picturesque Spanish casa from the 1920s next to the peeling frame shack, the lushly watered front yard of native flowers and the concrete paved SUV car lot. Guns and roses, skateboarders and speeding cars, a man hitting golf balls on his front lawn.

On Kittridge at Gloria, ferocious pit bulls kept by a friendly, toothless woman behind a broken-down dirt yard sit next to an Armenian owned limousine company, a home business behind lion bedecked gates and stucco pediment and columns.

At 6652 Gaviota, one unfortified mirage appeared: a sweet, middle-aged woman on her front lawn in a house-dress, watering a large tree with a garden hose.

We stopped to talk to her, startled by her openness and friendliness, her casual banter (“I was born and raised around here. I have been renting this particular house for 32 years”), intrigued by her whole retro setting and persona: white frame house with porch, tree swing, steel awning windows and asphalt driveway, and her manner of attire, mid-century Kansas farm wife. An American flag on a pole stood off in the distance, a skinny rail of a young man came down the driveway to fetch mail from the mailbox.

We took some photos of her, and continued our walk, ending up, as all walks in Van Nuys must, in the presence of the Holy Trinity: La Iglesia, La Lavanderia, and El Licor. (Allan’s Liquors).

2 thoughts on “Vanowen, Gloria and Gaviota”