Months ago, inexplicably, I was sent an email inviting me to experience a day of horse racing at Santa Anita Park courtesy of America’s Best Racing.

I was dumbfounded and somewhat suspicious, thinking this might be one of those messages from Nigeria advising me that Dr. Ooeexxlio had been kidnapped and his wife was in need of funds to get him out of Somalia.

I asked the sender of the email why I was chosen– as my knowledge and interest in equestrianism is as specious as my familiarity with Seabiscuit.  “We search for people within each market and try to convert them into new fans. It is all about getting new fans to head out to the racetrack,” explained Chip McGaughey, Brand Ambassador for America’s Best Racing.

I agreed to go, and summoned up my memory of Cary Grant in the 1946 film Notorious “accidentally” meeting Ingrid Bergman at a Rio racetrack, both dressed impeccably, he in his suit and she in her veiled hat and tailored outfit.

I put on my driving cap, recently purchased blue sharkskin suit and plaid tie, tie clip, Tattersall shirt, and wingtip leather dress oxfords. If I had to go to this event, I might as well go as if I were performing as the racehorses do, to compete and win.

Arcadia was there as it always is, a gigantic town of gigantic parks under the purple protection of the San Gabriels. I drove into the many square miles of asphalt parking lot, manned by good-looking, Wally Cleaverlike white boys who called me sir and took my $4.

I was met, at the gate, by a young and gracious couple: Jose Contreras and his wife Karina. Karina’s father is a jockey, she grew up in the sport, and her dad was riding that day.  Into the clubhouse we went, our left hands stamped with an invisible seal visible only under black light.

Santa Anita is a lovely old track, so its worn innards have gotten a much-needed facelift.  There are new, bright, white, stylishly designed concession stands serving craft beers, salads, and hearty sandwiches (I had thick sliced turkey on rye). Everyone I encountered at the track had that 1950s gaiety (in its old meaning) with plenty of “sweetie what can I get you” to the cashier who said, “My pleasure sir.” 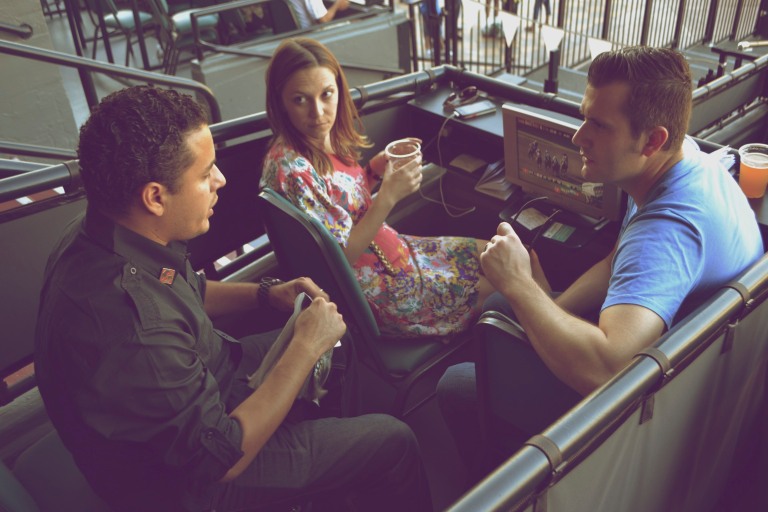 I was given a $50 betting voucher, as well as free beer and food, and then Jose and Karina brought me up into the box seats where we passed other patrons in the haze of cigar and cigarettes, beer and bourbon, enjoying the festivities of the impending races.

I’m not a mathematical person, but I caught on, somewhat, to the odds on the board, and used my dismal arithmetic to concoct winnings on 3 out of 9 races.  Jose was diligent and genuine in his love for the sport, and eager to bring another fan into the fold.

More guests arrived, other couples, newly baptized into the horse racing religion.  We cheered as our horses came around the track. As one close race came to an end, I shut my eyes, and squeezed my abs so tight I got a cramp.

Jose and Karina brought us down to the paddock, an oval area of grass where jockeys and horses come down and parade around in a sort of modeling runway for the four legged.

We went back up to our box seats, and I again brought up my vague memories of old Lincolnwood, IL, where I grew up, and Evelyn Marx, a red haired woman of 50, who weekly drove her gold Sedan de Ville to Arlington Park and bet on horses, a diversion thought unseemly by my grandmother. 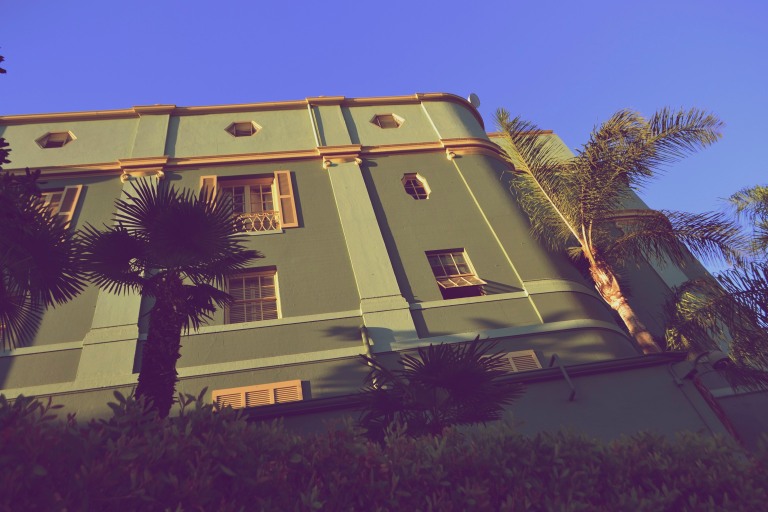 As I left Santa Anita, I walked past those 1930s aqua walls, bathed in late-day sunlight, past scalloped awnings and architecturally fluffy touches of femininity: decorative, frivolous and joyful.  Slightly buzzed, somewhat richer, I walked away from a day at the races immersed in escapism.

America’s Best Racing wants to recruit new blood and return the sport to its preeminence. And they’re planting enthusiasm for it in the most un-likeliest of people. The marketing people have something up their sleeves, though I cannot begin to guess what it is.