Even in 1960, people in Van Nuys were getting gunned down and killed.

As originally reported in the Los Angeles Examiner, on June 24, 1960 police discovered murder victim Shaik Dastagir, 49, dead in front of his home at 13944 Valerio St.

Shaik Dastagir was the owner of a furniture store and two apartment buildings. He often carried large sums of cash.

18-year-old Jim Shields, an employee of Mr. Dastagir’s, later confessed to police that he had tried to rob his boss by gunpoint, but his boss resisted, and in the struggle the killer accidentally shot himself in the arm. Mr. Shields needed money to repair his car and thought he would rob his employer to get the funds. Conscience later caught up and the tearful suspect surrendered.

The dead man, of Indian origin, was also the brother of an actor named Sabu Dastagir. 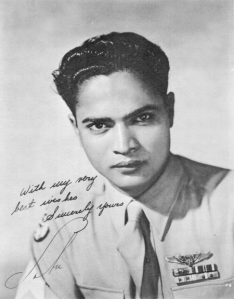 Sabu was an actor of some repute. Born in 1924, he was the onetime “Elephant Boy” of the movies, discovered in India by a documentary filmmaker who later brought the boy to Hollywood where he starred in several films, most notably “The Thief of Bagdad (1940) directed by Michael Powell. During WWII, Sabu became an American citizen, joined the Air Force and was awarded the Distinguished Flying Cross for bravery.

Sabu’s career declined after WWII.  He married Marilyn Cooper and had two children, Paul and Jasmine.

His wife later said that Sabu’s doctor told him, “If all my patients were as healthy as you, I would be out of a job.”