Once upon a time there was a broken down place where people slept on streets, garbage filled the gutters, the air was foul, streets were unsafe and violent, schools abysmal, prostitutes walked brazenly in daylight, and uneducated, fat, tattooed people smoked marijuana openly purchased from some sixty local dispensaries.

In this land, oil storage tanks were built next to people’s homes, and large land masses were devoted to the needs of cars: parking them, driving them, selling them, refueling them.

Though shabby and ugly, in disrepair and full of small illegalities, people stayed here, by choice or by necessity, and they eked out low paying jobs hauling trash, or pushing shopping carts full of cans down the road, or they worked at minimum wage stores selling liquor, candy or cigarettes.

And last night, in Van Nuys, two Latinas in their early 40s, products of this real place called the Northeast San Fernando Valley, spoke about problems and how they would solve them, and promised higher wage jobs, fighting for you whoever you are, and selling themselves as the saviors who would push back the demonic forces destroying life, liberty and property. 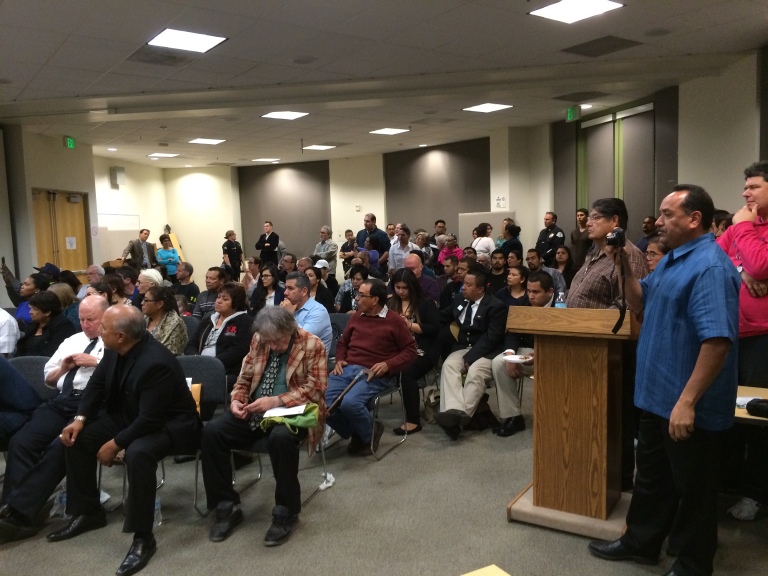 Set up in a room at the Marvin Braude Center, the ever growing 19 (!) member Van Nuys Community Council arranged a debate between City Council District 6 incumbent Nury Martinez and her challenger, Cindy Montanez.

The room was packed but badly arranged. The seating favored the 19 council members who had box seats. But the candidates were pushed off to the side, forcing the audience to rotate their necks at a 45-degree angle to hear the heavily accented ESL women debate how they would fight to better the district.

If the VNCC cannot design a room for debate how can they design Van Nuys at large?

Cindy Montañez, who once held high paying positions for the DWP, proffered herself as a poor girl from a family with values, six children sharing one bathroom and eating healthy food prepared by a church going mom.

She promised to fight against “overdevelopment” meaning any apartments opposed by anybody. She railed against the high-speed rail. She promised to upgrade Van Nuys Boulevard but to do so by opposing “mixed-use” development which creates walk able areas of retail, housing and commercial uses.

Councilwoman Nury Martinez, elected only 18 months ago, by defeating the woman at her side, defended her record of hard work, the mattresses and couches retrieved by El Trabajador en La Camioneta.

Ms. Martinez has evolved into a fierce housecleaner who wants to clean the streets of discarded refuse and disdained prostitutes.

But Ms. Montañez had murder on her mind last night, with a strange remark that she would rather have a couch on her curb than a dead body. She accused Ms. Martinez, who lords over 100,000 illegal aliens, of neglecting public safety.

Candidates discussed Obesity, which garbs modern Van Nuys as white gloves and hats did in the 1940s, by offering bananas, water and apples at 7-Eleven checkouts. Later on, the council would adjourn to devour cake, 2 liter sized drinks and 12-inch long, mayonnaise-laden sandwiches.

The two hour debate, moderated by a gavel pounding council, was then handed over to the smock garbed loud lady with the white hair and big gulp drink who got up and danced in front of the room screaming loudly about video conferencing in an insane demonstration of free speech and performance art.

The evening had closed. 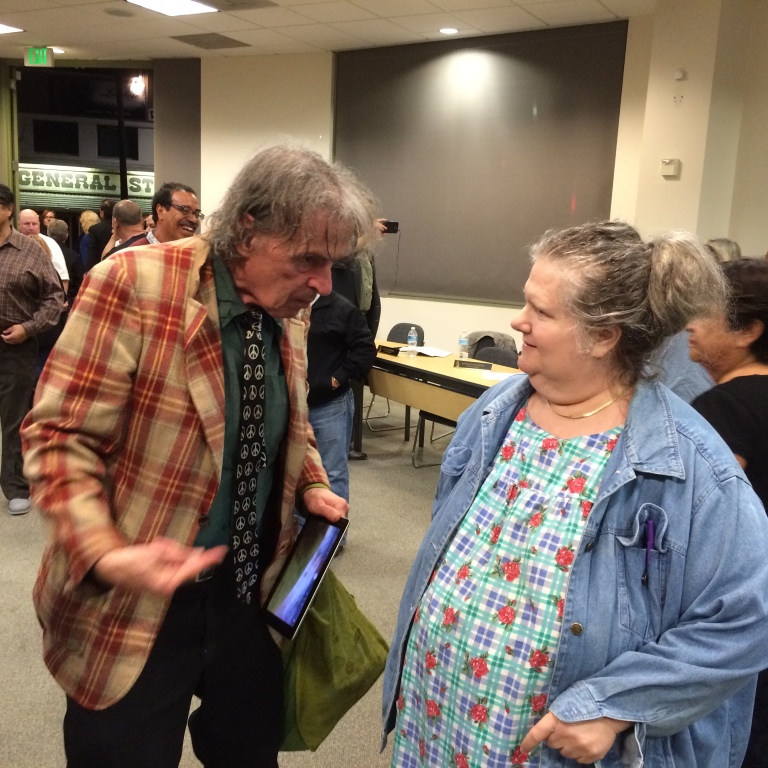 The future of the Northeast San Fernando Valley would be planted from these seeds. Here was dystopia in action, inertia and myopia, small minds and large people living in a teeming slum, which once grew oranges and dreams.

7 thoughts on “Power For the People’s Own Good.”