Gilmore St. Between Kester and Tyrone 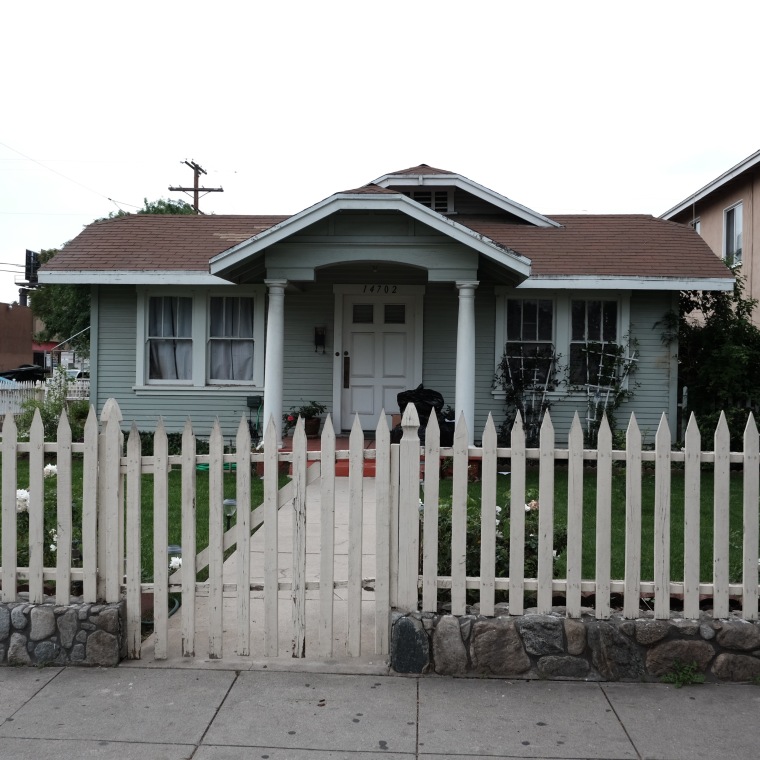 I walked along Gilmore this morning, a varied street one block north of Victory, and found old bungalows, church gardens, crappy apartments and neatly tended ones; along with a shoe repair shop, new Chinese food and a Mid-Century pharmacy.

Gilmore is an old street. A sidewalk was paved in 1929, but the road goes back further than that.

It was part of old Van Nuys, near town, school and church.

In the obliterating 1950s-70s, many old houses were torn down and replaced with rentable apartments, way before the revived fashion for “Mission.” If Gilmore had been preserved as only homes, it might look like today like a neighborhood of Pasadena. 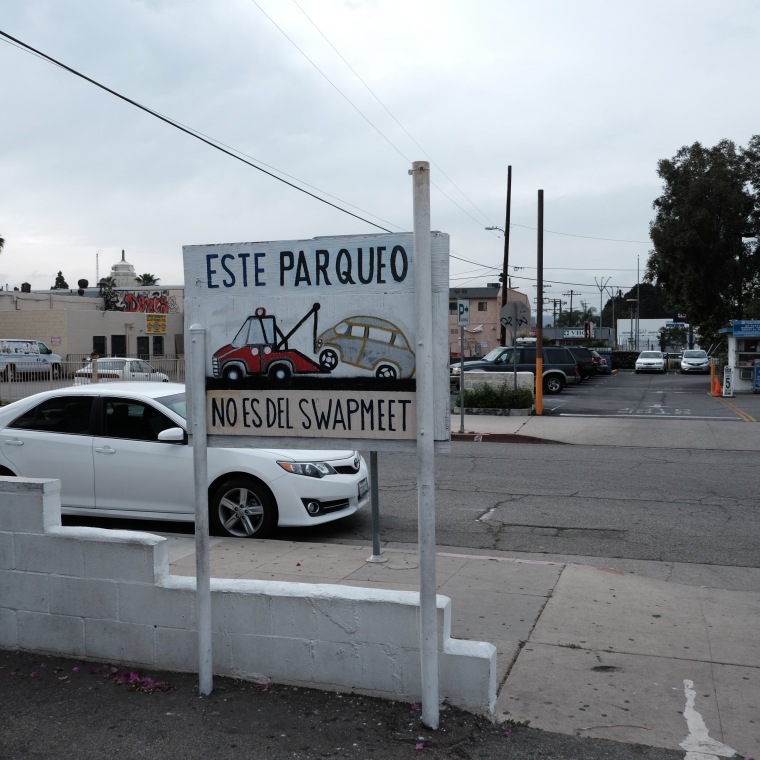 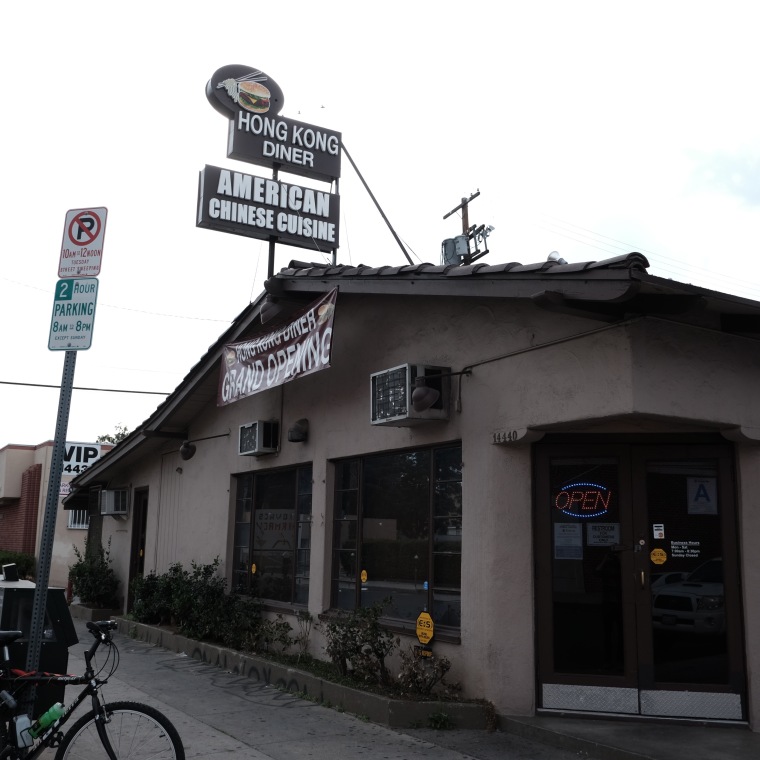 One might understand a small shopkeeper viewing the aforementioned with fear or suspicion.

Yes it is the photographer, with a camera slung around his neck, who gets the nasty stares and the unwanted questions.

At the colorful Kovacs Pharmacy, a pharmacist came out, confronted me and wanted to know why I was shooting photos.

She asked for my card. I had none. I told her I was a photographer.

She went back inside.

Does one need to have an answer for taking a photo? Would you ever dream of walking up to a stranger- talking on the phone- and asking who they were calling? Would you walk up to a driver stopped at a light and ask, “Why are you driving?” 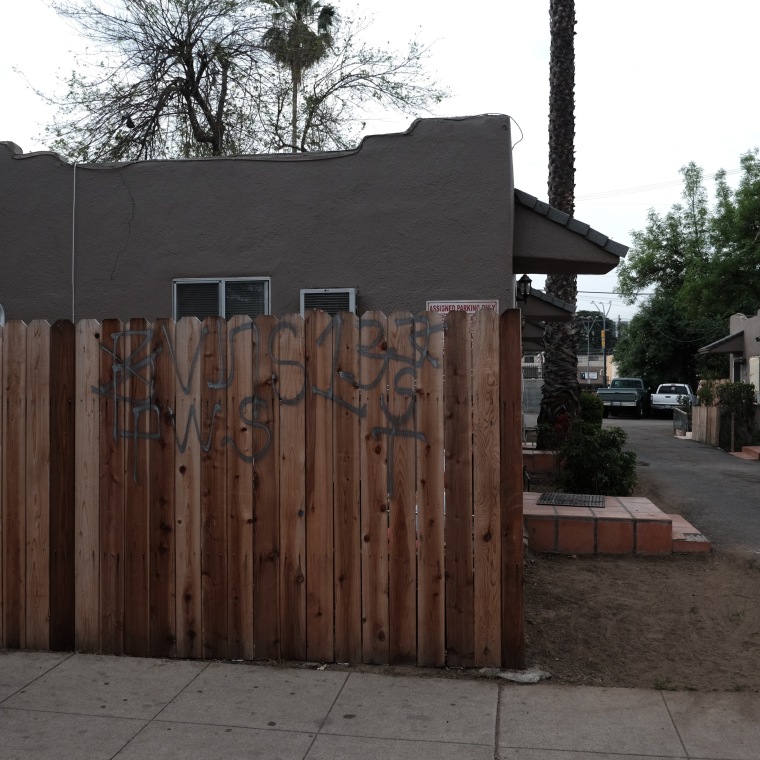 At 14417, next door to Kovacs, time stands still as faded light illuminates a garage set way back in the yard, the kind of house and garden that once dotted this street.

At Sylmar Avenue, the Van Nuys Elementary School is still handsome and historic, roofed in red tiles and painted in warm tan.

The infamous spray marker of the Barrio Van Nuys (BVN) marks a fence outside of a bungalow court across from the school. 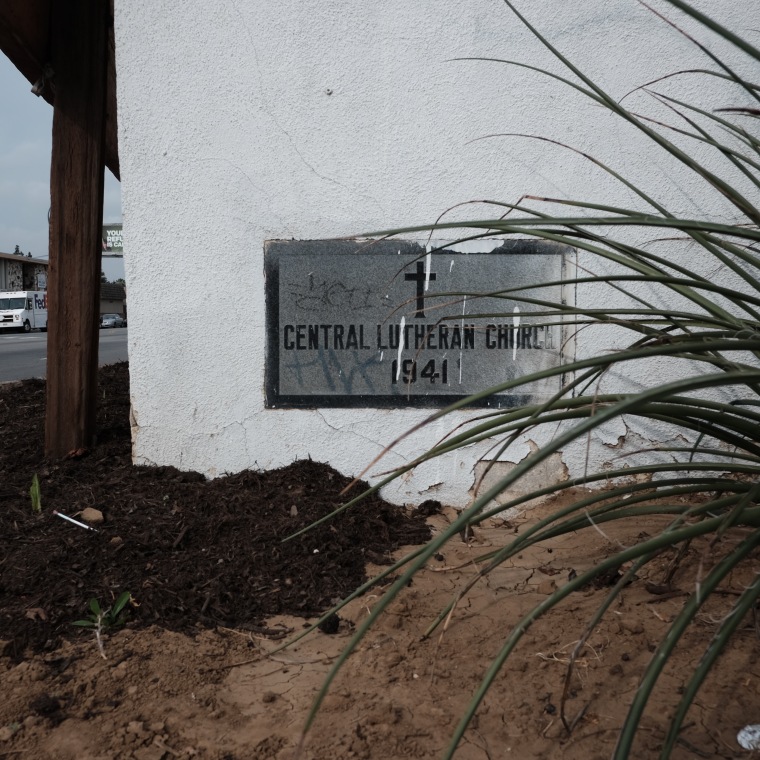 The Central Lutheran Church, whose white and red brick façade on Victory at Tyrone seems sad and neglected, has a surprisingly vigorous and lush group of edible gardens spreading over at least a half acre or more of land. Very well-tended and green, the vegetables and plants propagate magnificently in fertile soil alongside wooden stakes and raised beds. It looks like a future bumper crop. Its gentle greenery stands in stark contrast to next door car repair and vacant parking lots.

When people talk about the revival of Van Nuys, of making the community better, they might start by visiting a street like Gilmore. Narrow and walkable, tree-shaded and neighborly, it has a variety of both individuals and institutions who are already contributing positive change to this district. They are feeding the homeless, educating the children, planting organic gardens and making Van Nuys come to life in the most unexpected and surprising places.