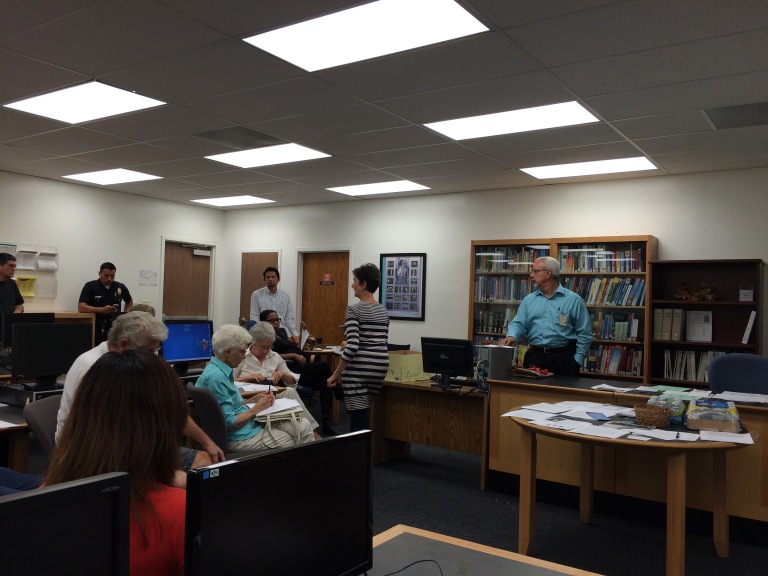 Courtesy of a community minded neighbor, we folks gathered tonight in a computer lab inside Casa Loma College on Kester to hear Senior Lead Officer Erica Kirk, Gang Officer DeLeon and a man from the Los Angeles Department of Building Safety speak about property crimes, prostitution and gangs.

The people were mostly older, largely white, and on friendly terms with one another. Before the speakers began, two chatted up about church, “I don’t hear the bells ringing any more!” and on grandchildren, “My granddaughter still works in Woodland Hills for a sod broker!”

Around the building, within spitting distance, ghetto apartments were sprayed with gang signs, prostitutes walked freely, speeding cars plowed through red lights, and old refrigerators and couches were dumped alongside the road.

But inside the room, reassuring voices of authority, festooned with badge and pistol, spoke of laws and arrests, patrols and progress against criminal activity.

Abandoned houses, trashy front yards, barking dogs at 3am, explosions, gunfire, helicopters, stolen cars, discarded marijuana containers, dumping, ubiquitous sex trade, stinky winds that blow sewage smells into the bedroom, none of these facts of life in Van Nuys would soon disappear, but some attendees were damn angry and determined to speak up and put a stop to the madness.

“Why don’t you arrest these prostitutes and ship them up to Nevada where it’s legal!” one man yelled. “They’ve been at it for forty years on Sepulveda.” And I pictured a sad whore, walking in the sun since 1975, wrinkled, abused and hated by local homeowners.

Another new arrival to Orion came with his pretty wife and spoke about his accounting of the used condoms found on streets around his beautiful estate.

“Since August 1st I’ve counted 33 condoms on Blucher, 44 on Langdon, 53 on Peach Avenue and 27 on Blucher!” he announced. My mind, always visual, imagined a sticky, gooey condom near a peach. For his wife, inviting the grandchildren into the front yard while a sex act was going on in front of the roses and white picket fence was quite appalling.

Some gentle people seemed innocent as to the fact that they lived amongst violence and anarchy. “The Mexican Mafia? What’s that?” a woman asked.

Another older woman spoke of her son coming home at 3am and passing three young men tagging a stop sign near Valley Presbyterian Hospital. “He stopped his car and rolled down his window and asked them why they were doing that,” she said. Officer DeLeon advised that it was, perhaps suggestible, not to confront three taggers at 3am in Van Nuys.

If Donna Reed and her family were transported to tonight’s meeting they would fit right in. That old time Angeleno, who came of age after WWII, whose life was formed in a sea of childish televised wonderment , made an appearance tonight, as delightful and improbable as Walt Disney meeting the Devil.

The local sweeties who came for this meeting were the nice ones who make up the silent and invisible and powerless backbone of Van Nuys. They cannot compare, in numbers or influence, these citizens, to the 180,000 who are in Van Nuys illegally, and whose presence regularly is spoken of in terms reverential and pandering, as when immigration reform comes up, as if we as a nation are commanded to do something to break the system further and destroy national sovereignty in the name of political correctness.

These people who gathered here tonight are regularly told there is not enough money for law and order, but when I spoke up and asked the crowd if they would pay fifty cents a gallon tax on gasoline to double the size of the (13,000) LAPD and bolster it, nobody raised their hand. “Why don’t you tax cigarettes?” a female cancer patient asked.

There will no doubt be more community meetings in the future, but the prospect for improvement in Van Nuys is dim. Without leadership, even the best intentioned community group, even the best cops on the beat, cannot hope to overcome the nonsensical and insane carnival of crime that dances all around us day and night. 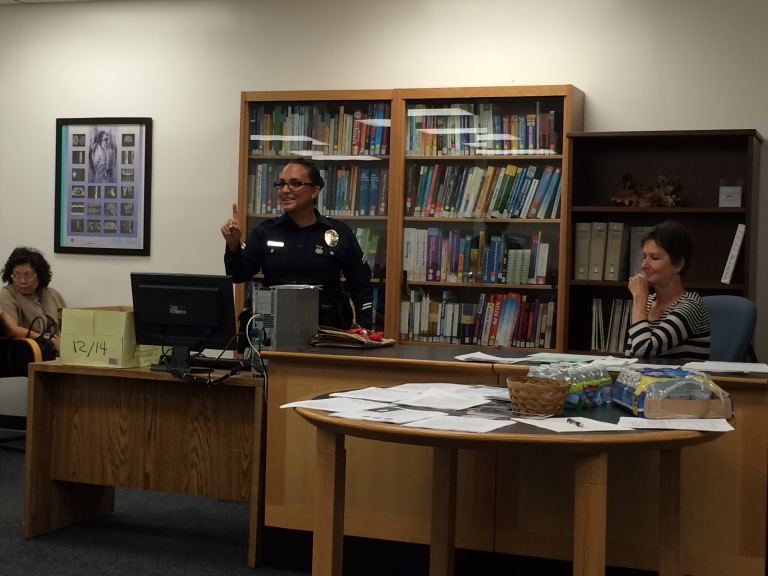 One thought on “The Local Sweeties and Public Safety.”