We are hosting, for the next few weeks, a family gathering. There are guests from Malaysia, Singapore and Switzerland, women all, except for the family patriarch, 83-years-old, who, despite his recent health setbacks, flew 19 hours to see his granddaughter graduate from business school and join the festivities.

The house is crowded and people are sleeping on futons, air mattresses and sofas. We bought sacks of sweet potatoes and Vidalia Onions and cartons of organic cherries, blueberries, and strawberries.

For mental health reasons, I stocked up on beer.

Because this is a Chinese-Malaysian family, I get to see and be a part of, close-up, the Hainan dialect, the Straits accented English, so sharp and so distinct;  and the laughter, and sometimes the arguments which I observe but do not partake in.

Prescriptive, advising, pedantic, loving, cautionary, understanding, this is the general aura. When you are in the embrace, you are looked after, and you look after others.

Around 3 O’Clock in the afternoon there are cakes and coffee and people gathered around the dining room table chatting and laughing and sending photos over mobile devices.

As an American, I take pleasure in people being awed by the things I never think about: the copious enormity of Costco, the directness of speech, the assertive and self-assured women, the large portions of food, the open vulgarity of sexual talk and provocative dress, and the friendly kindness of strangers.

On “The View”, a show blaring today, they were arguing and screaming about politics, and our guests, fully conversant in English, must have wondered about how we get away with saying what we want without fear of arrest or condemnation. There are sedition laws back in Malaysia and public discourse is held back, and one would not broadcast aloud against the government for long without inviting arrest.

Whoopi Goldberg could be a political prisoner there. Imagine that.

One of our guests liked the small chatter and joking banter she saw on the local KTLA news. It was so casual and relaxed she said; so un-like her country.  Target, Costco, Sam Woo…we really do have it all.

Nothing is so nice as being admired for banality.

We went to Vegas for a two-day trip to stay at room cheap, free parking for now Mandalay Bay and visit Hoover Dam.

In the casino, where machines insatiably swallow $20 bills, Liberty Bell shaped smokers waddle through. The smell of second hand smoke wafts through the air like hay in a stable.

We drank at Red Square during their happy hour and had two whisky cocktails for $24. Later on we ate Japanese food where a fist-sized piece of salmon goes for $49. When I went to withdraw cash from the ATM they took a $6.99 fee.

At Terrible’s Gas Station on The Strip the attendant who rang me up called me honey and at the Market Grille Café in North Las Vegas I was darling and I was sir and sweety at the Mizuya Lounge. Vegas is nothing if not affectionate to strangers. 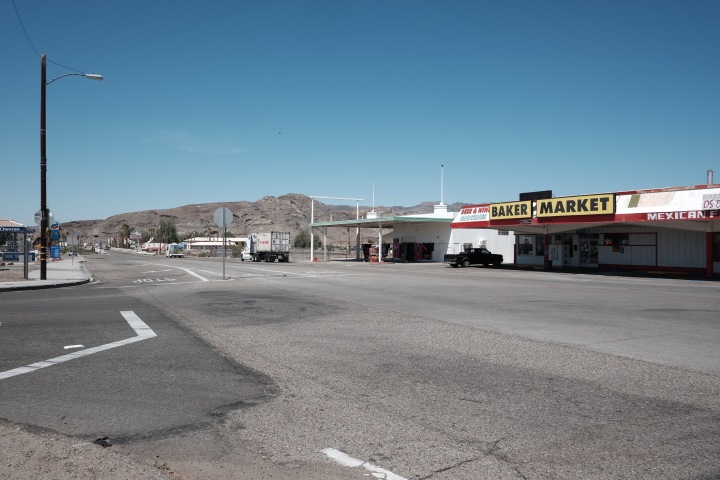 On our way back from Las Vegas yesterday morning, we stopped in the Mojave Desert to see the world’s tallest thermometer, use the restrooms and buy some water.

Hardscrabble, windy and roasting, Baker is significant in its nothingness: a strip of dilapidated and defunct motels, a country store selling hot sauces and craft sodas, and the home of the Mad Greek Diner, occupying a key corner off the highway.

We parked first at the thermometer, which was cool at only 93. We were looking for bathrooms, but we couldn’t find any there. Instead there was a metal and stone monument featuring an egg in a frying pan.

As we made our way down to the country store where urinals and toilets awaited, one uncle received a text from the young woman about to graduate. She was in her classroom at UCLA and her school was in lockdown after a shooting. A gunman, or possibly two, was on the loose.

The uncle told me, but we kept the knowledge of the unfolding events from the mother, the elderly father, and the aunt.

We got back in the car, and were stopped in the middle of the desert by road construction. The temperature outside was about 100 and the air-conditioning was blasting. The two aunties and their father were sleeping in back.

So I turned on the LA news, KNX 1070, and gradually the terrifying words filled the car: police, shooting, FBI, active shooter, two dead, locked in the classrooms, students, LAPD, bomb squad, SWAT team. The mother, napping in back, awoke, and gradually, without us saying anything, realized her youngest daughter’s school was now a crime scene.

A few more texts came from our girl. She said they were hunkered down in darkness. But she was all right.

We are all in our classroom with locked doors and the lights off. I think they confirmed it’s a murder-suicide.

Worried, in suspense, we listened to every development at UCLA as reported by KNX. Why did I turn on that radio?

We inched along at 15 or 20 miles an hour. The traffic broke, and we continued west, now at 60 or 70 MPH into Barstow, and then that steep, disorienting angle into the brown cloud that filled the mouth of the Cajon Pass, and later travelling along the flat 210, in Rancho Cucamonga, we got relief.

We are being let out now.

Our loved one was OK. But someone else lost a son, a friend, a husband; and a killer died who was also someone’s child. Bullets, brains, and blood took their monthly seat alongside erasers and magic markers.

America! What is wrong with you? You have so much going for you! Everyone likes you! People are so impressed by you! Don’t fuck it up! Use your God-given talents! Just like my mother used to tell me.

I am still deeply in love with the United States of America. When foreigners say something against it to my face, I remember it. I want to present it and show it proudly.

Riding back from Las Vegas yesterday, a typical American morning unfolded for our guests from Malaysia. I wasn’t proud.