In the first third of the 20th Century, Los Angeles developers built many tall apartments in the midst of single-family homes.

One sees, in the older sections of the city, in West Hollywood, Koreatown, and West Adams, the presence of five, six, even ten story apartment houses that pop up, sometimes mid-block, in-between single family properties.

These photographs of buildings, from the USC Digital Archives, are historically valuable, but also aesthetically heartbreaking, for it shows a city where architecture mattered, and humans were housed in civil, respectable, affordable places. Isn’t that the bare minimum expected in a “First World” nation?

There may have been poor people in 1925, but they didn’t live in the tens of thousands under bridges, on park benches, or wander the streets as zombies, covered in dirt, screaming obscenities. Nor would the society back then have allowed mass vagrancy as public policy.

The old buildings were strong and subtle. They wore their classic proportions without irony. They commanded respect quietly. They stood confidently, wore facades in single colors, and were built of solid materials like brick, solid concrete or smooth stucco.

Today, market style makers demand new apartments broken up nervously in clashing colors, painted in clownish and garish hues, most likely to reduce their bulk, preventing probable offense to neighbors prickly over density. They scream fun, but omit horror on the first of each month when rent is due.

But, in fairness to these attention grabbers, at least they have a dialogue with the street, and introduce shops and ground floor activity to the area. They just do it in the Instagram way, by shouting, “look at me man!” 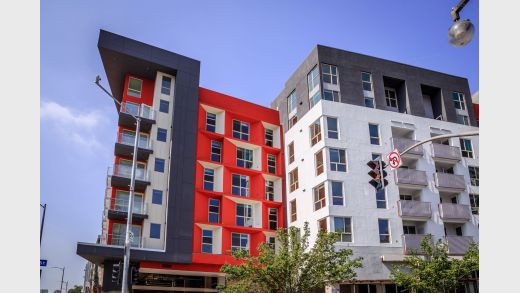 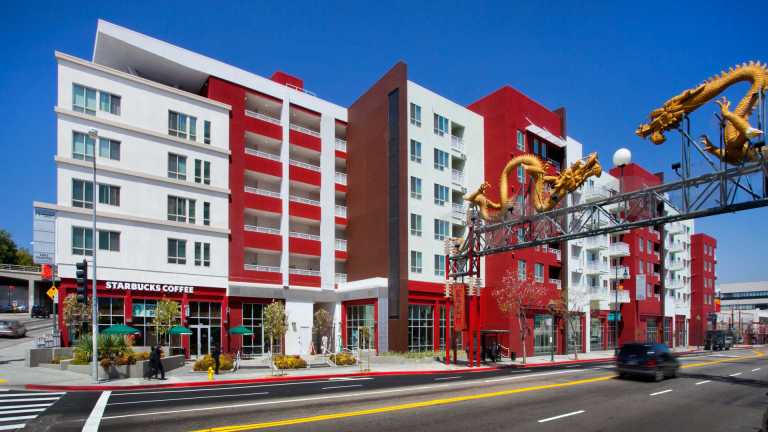 The old buildings always marched right up to the sidewalk. You entered by walking up to an entrance. And this zoning reinforced the urbanity of the neighborhood, because it created chances for pedestrians to interact. Compare that to six lanes of Sepulveda, and parking garage apartments where the only people walking outside are selling something illegal.

Imagine if Van Nuys Boulevard near the Busway had a Langham or Talmage Apartments with hundreds of residents who walked to the bus, or rode their bikes, or ate in restaurants in the neighborhood?

The old civility of courtyard housing, of interior spaces, shielded from the sun, planted with greenery, done with subtlety and grace, that is also how this city used to build.

What is preventing the State of California, the City of Los Angeles, the people of this region, from banding together to amend the harmful zoning laws that prohibit certain types of structures, once commonplace 100 years ago, from being built again?

“A whopping 87 percent of LA’s total housing supply was built prior to 1990, while only 13 percent was built in the last 25 years.

More recently, between 2010 and 2015, we’ve only added approximately 25,000 new units. That number does not include all of 2015 and includes none of 2016, and it will grow by 30 to 50 thousand in the next several years as existing developments finish construction and planned projects get underway. But at best we’re roughly on pace for housing production similar to the ’90s and ’00s, both of which saw historically small amounts of new housing and historically large increases in housing prices. That’s not a boom, that’s the continuation of a decades-long slump.

This slump is reflected in our city’s vacancy rates, which have a direct relationship to home prices and rents. Lower vacancy rates cause prices to go up faster. It’s exactly the same relationship we see with unemployment: When unemployment is low and fewer people are looking for work, labor is scarce and so workers can sell their labor for more money. As a result, job applicants and existing employees gain bargaining power and their average pay increases. Likewise, when housing is scarce, landlords gain bargaining power and rents increase.”