50 or more years ago people (of means) ate out perhaps once a week.

In Van Nuys, up until the late 1960s, the dining scene reflected the overwhelmingly white make-up of the region. The vast immigration from Central and South America, Africa and Asia that has made present day Los Angeles so varied and so heterogeneous and brought us Malaysian, Taiwanese, Laotian, Mongolian, Thai, Filipino, Vietnamese, Guatemalan, Russian, Indian, Burmese, Persian, and Ethiopian did not exist half a century ago.

What was on the menus back then offered a variety of “German”, “Italian” and “Chinese” cuisines that had as much authenticity as a studio back lot.

Which is not to deride the food. It was offered to customers graciously, copiously and somewhat formally, as people would not dare enter a restaurant without being dressed up, with men in suits and ties, and women in dresses, skirts and high-heels. 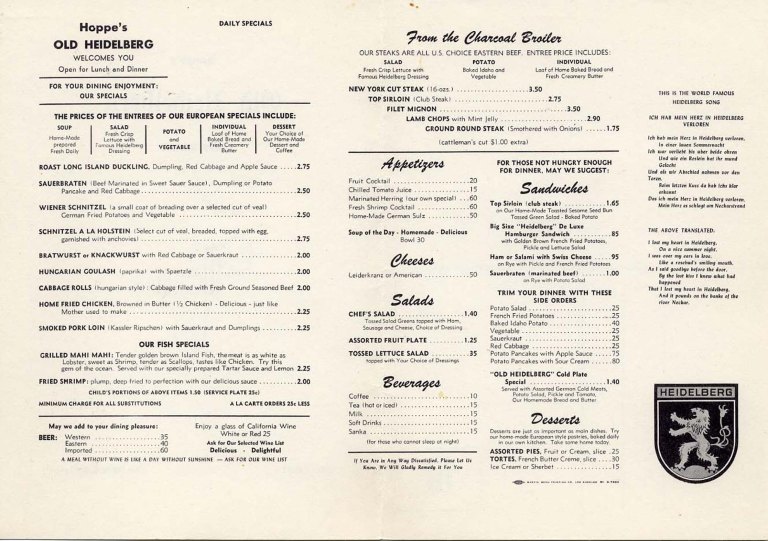 At Hoppe’s Old Heidelberg, 13726 Oxnard, men and women who fought in WWII, 15 years earlier, would dine guiltlessly on Schnitzel A La Holstein for $2.75 and enjoy an imported German beer for sixty cents.

Entrees came (free of charge) with soup, salad, potato and vegetable, fresh bread and butter and a dessert. Light eaters might order fruit cocktail for 20 cents and a glass of tomato juice for 15 cents.

Otto’s Pink Pig at 4954 Van Nuys Bl. offered many fine seafood dishes, some of which are seemingly extinct in Los Angeles dining, such as frog legs, mountain trout, abalone steak, filet of sole, and Crab Mornay. All the aforementioned were also offered under $5.

At 6801 Van Nuys Blvd. at Van Nuys and Vanowen (think of that lovely location today) stood Nemiroff’s with its blue menu and regal crest.

It seems to have been a Jewish style deli much like Jerry’s, without kosher offerings, but selling such sandwiches as Lox and Cream Cheese on Bagel for $1.25 and Chopped Chicken Liver on Rye for 90 cents.

Every day of the week offered a special, such as Monday’s Beef Tenderloin Tips with Egg Noodles and Garden Fresh Vegetables, described as an “exquisite meal” for $1.95 or Friday’s Filet of San Francisco Bay Red Snapper for observant Catholics. Indeed, Nemiroff’s seems to have delved into many styles with its German Sauerbraten ($1.95) and Irish Corned Beef and Cabbage with boiled potatoes and fresh carrots, horseradish sauce cooked in “Nemiroff’s Kettles for natural flavors” and it also cost $1.95.

There were many more restaurants, too numerous to mention, but places, spoken of today, regarded fondly, chiefly because where you ate when you were young is sacred, and every drop of cottage cheese and chocolate pudding, canned peaches and fish sticks, transports you back to a time when the world possessed freshness, vigor, and possibility.

And all the dreams you had were still in the future, waiting to be fulfilled, and a dream job, a dream car, a dream girl, a dream boy, a dream house, existed not only in the imagination, but for many, across this region, in reality.