In September 2017, 180 small businesses, 58 properties and 1,000 workers in Van Nuys learned they might be in the way of a 33-acre demolition project, Option A, proposed by Metro Los Angeles for a light rail service yard. Oxnard, Aetna, Bessemer and part of Calvert St., from Kester east to Cedros might be condemned.

A total of four options: A, B, C, and D are under consideration.

B, C and D are centered on the areas adjacent to Metrolink North (which are existing train tracks) and all involve far less demolition and displacement than Option A. 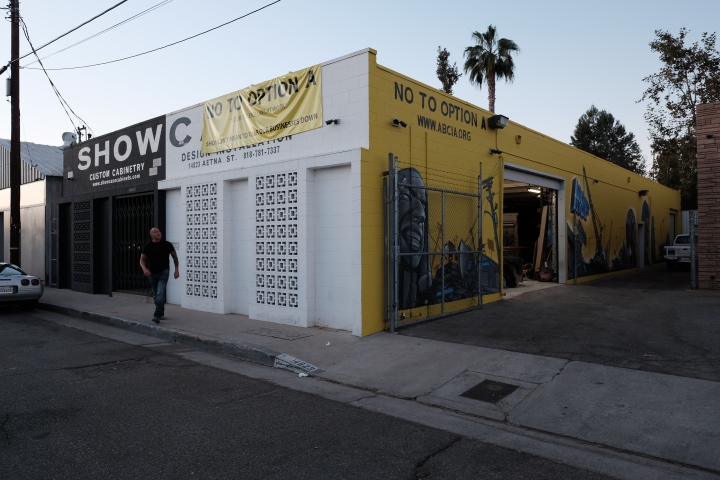 The bright, lemon yellow banners one sees all over the Kester/Oxnard area come from opponents of Option A who include community leaders, business owners and also the Office of Councilwoman Nury Martinez, who is firmly against something that would wipe out thriving, small companies who repair cars, build cabinets, record music, clean up flooded properties, plumb, weld, design and innovate right near downtown Van Nuys.

Ms. Martinez knows that the loss of these small businesses: walkable, diverse, local and entrepreneurial; would be disastrous for Van Nuys which has already been gutted out by the departure of GM a generation ago.

After multiple meetings downtown, speaking in front of the Metro Board, as well as Mayor Eric Garcetti and Board Member Sheila Kuehl, the Option A community was assured that an official announcement was forthcoming in January 2018. Walt Davis, Metro Transportation Planning Manager, was almost sanguine and breezily casual about how quickly the decision would be made to NOT APPROVE OPTION A.

Option A still sits on the table. And people are increasingly nervous about the delay.

For fifty years, her late husband Bill ran Little Willy’s garage here. Marilyn worked as a CPA upstairs and kept an eye on the factory floor below from her elevated perch.

She is a smart, numbers ordered woman who knows how to invest, balance books, and manage real estate. She is not a super wealthy person, but rather a working woman who used 14807 to leverage the purchase of other properties. She is still paying off the mortgage, and the prospect of losing her family’s building saddens and frightens her.

For 14807 cannot be sold or rented to new tenants while the uncertainty of Option A hangs in the air.

I spoke with her when she came to visit her property today, and was handed a rent check by one of her tenants, Tom Bolan, a plumber.

She was also greeted by her largest tenants, Jeff Montag and Jim Tabolsky, owners of Regent 24/7 Carpet Cleaning, a company that has ten employees who clean out flooded properties, and work with property owners and insurance companies to remediate water damage.

Jeff and Jim, best friends and business partners, grew up in Sharon, MA and came to Los Angeles in the late 1980s. Jeff has four kids and three grandchildren and Jim has five children. They are solid, hard-working, experienced, and well-respected.

14807 is perfect for Regent because trucks can drive right into the building and unload water logged cabinets, furniture, and rugs. And equipment to clean the carpets can be put right on the truck. The 405 is nearby, and the workers also come local. It is an ideal place to have a small business. 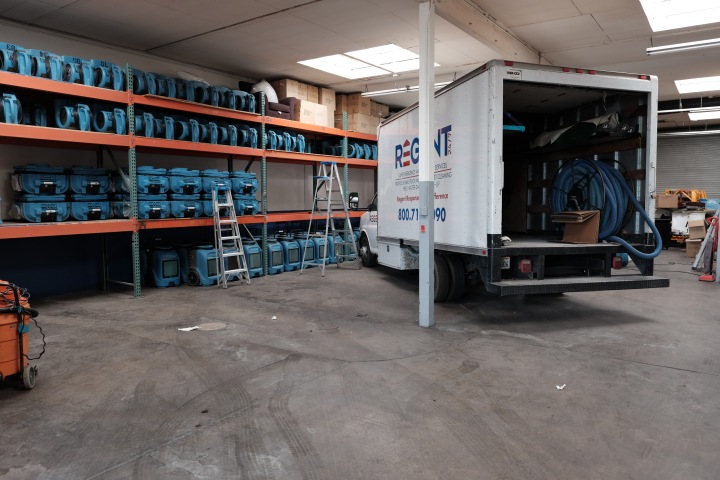 Marilyn Balduff may have a business head, but she also has a sentimental heart. She spoke of her life, born and raised in Los Angeles, marrying Bill at age 18, the days they spent at Little Willy’s garage, and their mutual interest in specialty cars, including a 1908 Thomas-Detroit Runabout that Marilyn bought from Harrah’s (the former Harrah’s Automobile Collection at Reno) in 1983 when she saw its picture in the auction brochure and fell in love with the car.

Marijuana growers, who are gobbling up space all over Los Angeles, and out-bidding legitimate enterprises, by offering all cash and higher rents to owners, have approached her.

“I don’t want them. The mold and the humidity will ruin the building. And it’s not only the moral issue, it’s a degradation of the place,” she said.

Over on Calvert Street, Israeli born car repair mechanic Doron Danisky, 53, runs a scrupulously clean, orderly shop, D Best Automotive. His topless red Jeep with Hebrew lettering is parked along the curb near MacLeod Ale. (The Luck of the Scottish brewery, on the north side of Calvert, is outside of the area threatened by demolition.)

Doron bought his 3200 square foot building in 2011, and he uses his mechanical know-how from the Kibbutz (Yagur) to fix large trucks, jeeps and any old school vehicle. He has three rotary lifts and two employees. The atmosphere is airy, friendly, and low key. 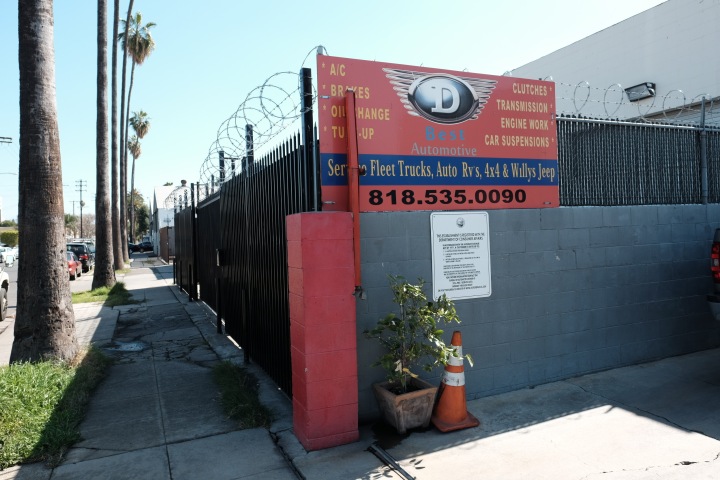 “I’m not worried,” he said, offering cold water, soda and chocolates to me as we sat in his office. “Eat chocolate, it’s good for you.” He seemed fatalistic about Option A.

“It’s a dream location, and when I heard about Option A, I was quite upset. But now I am OK with whatever happens,” he said.

But most, who depend on this district to earn a living, are not OK, until they hear the decision from Metro.

Apprehension and dread hang in the air along with the acrid fumes of car paint and the sour smoke trails of cannabis.

If eminent domain comes to Van Nuys, as it did with the tragically failing ghost-slum Civic Center (1960), another viable, historic, community-oriented, and socially supportive area will be ripped out and replaced by a post-apocalyptic emptiness.

Will the bureaucrats and elected officials make the right decision?

The people of Van Nuys are waiting.

3 thoughts on “Option A: Still Waiting”