Yesterday Andreas and I drove over to an old neighborhood to walk around and take photos.

The location was south of downtown, and the 10; east of the 110, and encompasses streets such as Washington Bl, Central, San Pedro and Maple.

Most of the houses were built in the early 1900s. They are wood cottages with ornamental embellishments, front porches, little yards, along streets punctuated by a variety of churches.

There are some glorious old theaters, including the Moorish revival style Lincoln (1926), which was once the heart of the black live performance music community along S. Central Avenue.

The long, distinguished history of black businesses, churches, educational institutions and artists who lived and created here is much too long to discuss in this short blog post, but this is where, from the 1920s to the 50s, much of African-American creative life was centered.

Today, the shops, the residents, the people on the streets, are largely Latino, though that designation is sweeping and generalizing too, and cannot describe the immutable variations of life here. 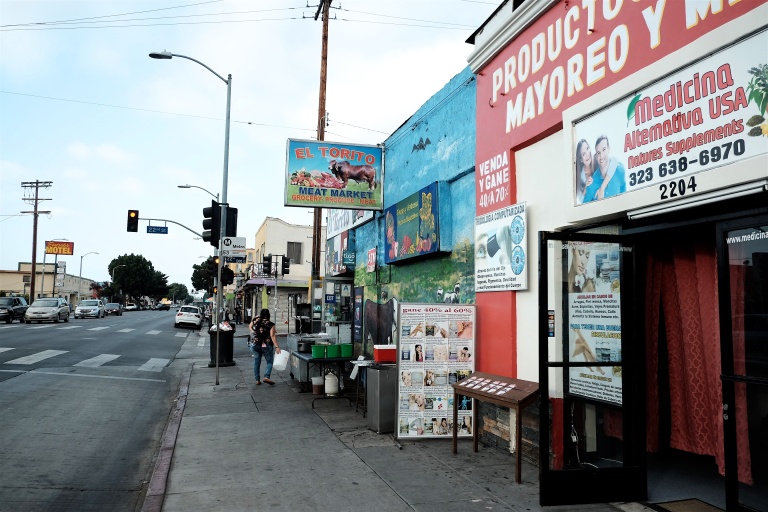 On our walk we encountered friendliness everywhere, from people saying hello on bike, to men grilling sausages, to porch sitters waving and engaging in conversation. There is street life here that is supportive, engaged, healthy, perhaps more grounded and nurturing than one could find in any area of the San Fernando Valley.

There are fine murals on buildings, and most of the alleys we walked past were shabby but kept free of debris, cleaner, in fact, than some in Van Nuys.

On Washington Boulevard light rail zooms past architectural relics from the past century: the Scully Building at 725 was built in 1930 and is a spectacular “Gotham City” type of Art Deco with steel windows and vertically decorated brickwork and carved stone; 722 was built in 2017 and is a new 55-unit apartment with government backed funding providing decent housing in a city starved for it. A mural on the side of the building is spectacularly subtle, artist unknown. 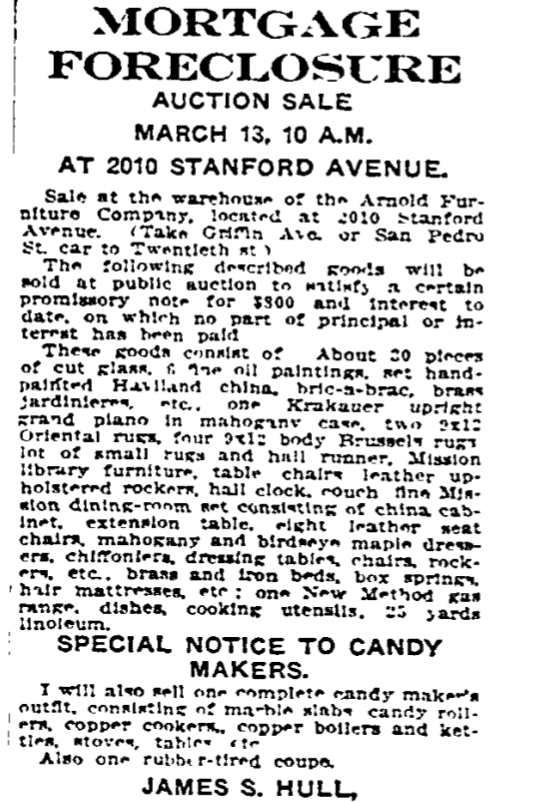 Many of the streets down here (excepting Washington Bl.) are narrower than most in modern Los Angeles, creating an enveloping and embracing closeness between pedestrians and businesses, and making biking and walking safer. Every car that we encountered at an intersection, gracefully and politely, ushered us to walk in front. Yes, it’s the law, but its routinely flouted in richer communities of Los Angeles, but not down below Washington Blvd near S. Central Ave. 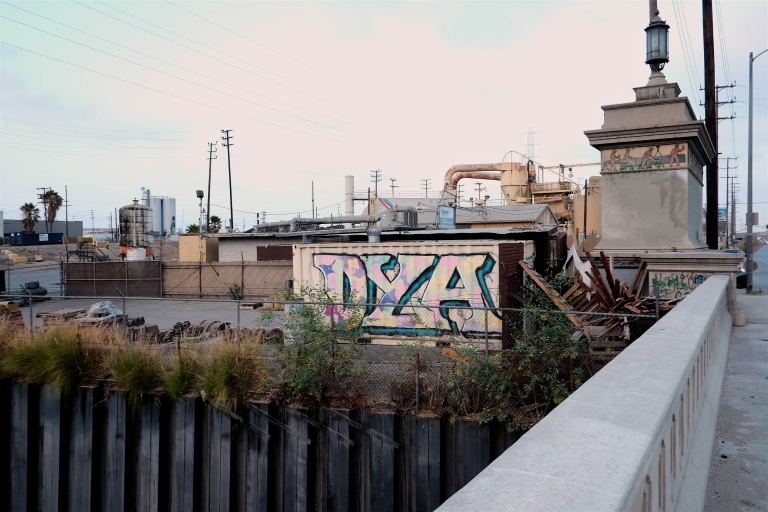 Our tour ended, and culminated, in the glorious Washington Bl. Bridge (1930) that crosses the LA River, its majestic classicism fouled up by graffiti. Yet its polychromatic terra cotta frieze panels, depicting the art of bridge building, are still present, if grimy, on the four pylons on each side of the structure.

At that bridge, as Mother Nature blew the waning candlelight out of the sky, ushering in the night, the remnants of some deceased industrial glory and aspirations of greatness still cried out for recognition.

2 thoughts on “Exploring an Old Neighborhood on a Cool Summer Afternoon Near Dusk.”