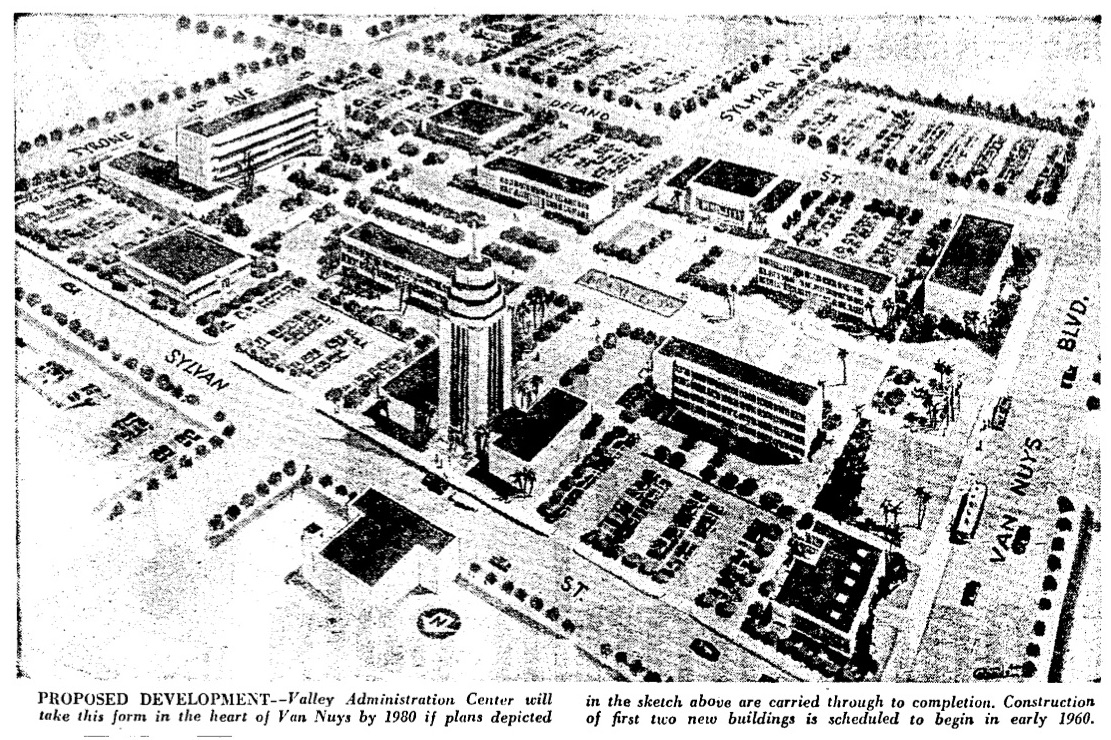 It was “230 square miles encircled by mountains and roofed by a blue sky.”

Its 800,000 residents were more populous than Boston or San Francisco and its land size equaled the city of Chicago.

It was famous for “its distinctive way of life” a “perpetual exhibit of Modern Suburbia at its brightest and biggest. Valley people live outdoors with patios, swimming pools and gardens all year through. They wear sports clothes and drive sports cars.”

So exclaimed the Los Angeles Times on December 13, 1959 in breathless prose accompanied by an aerial illustration of the Valley Municipal Building surrounded by open parking lots and flat topped office buildings floating in a sea of spaciousness.

And Valley industries were tops, in the forefront of electronic, missile and space age developments. PhDs were hired by the thousands, and the Van Nuys Chamber of Commerce sponsored more than 239 courses for upgrading personnel including 60 UCLA classes taught right here in the San Fernando Valley.

The Air Force and the US Government loved the spaciousness of the valley and its highly educated workforce and spent over 1/3 of ballistic missile budget dollars here.

90% of all filmed television was produced at such studios as Warner Brothers, and Disney in Burbank; Universal in Universal City and Republic Studios in Studio City.

And to make sure the success, the glittering, shining, prosperous times continued, efficient government services were necessary.

In 1959, a $7 million dollar streamlining of the Valley Administrative Center in Van Nuys, described as “second only to the Civic Center in downtown Los Angeles” began a sweeping, and comprehensive remodeling of the area by bulldozing hundreds of old bungalows and opening up a vast pedestrian mall which would one day be a glorious assemblage of courthouses, government offices, a new library, a new police station, and parking for tens of thousands of cars.

If the luminaries, the citizens, the people of Van Nuys in 1959, could have only looked 60 years into the future, they would have been stunned by the enormous progress our town has made, truly a model of technological, architectural, social, cultural, and aesthetic achievement.

Councilwoman Nury “No Human Trafficking” Martinez keeps everyone on their toes, and should the police even hear of one intoxicated person nearby, they are immediately apprehended and taken into custody.

Our schools are wonderful, ranked first in the world, with the highest paid teachers in North America, and schoolchildren getting healthy exercise walking and biking to nearby classrooms. All students in Van Nuys are required to live near school so roads are not jammed with parents driving students to other districts.

Recent statistics show that only 1% of all children are obese; and diabetes, obesity, mental illness, marijuana and drug addictions are almost unknown in this healthiest of districts.

Mayor Airwick Garbageciti is adamant in keeping Van Nuys clean, lawfully prohibiting anyone from sleeping, camping, tenting, RVing on public property. Nobody disagrees because after all the public taxpayer pays for public property and expects it to be kept in tip-top condition.

A new law proposed by the City Council and supported by Mayor Garbageciti will require RHP (Registered Homeless Person) identity cards which will monitor people to make sure they report to 40 hour a week jobs cleaning parks and mowing lawns and working for $10 an hour to assist elderly residents who need house painting and yard maintenance.

We, in 2019, are rightly grateful for what our ancestors built here, and we vow to keep it as perfect as it is for many years to come.