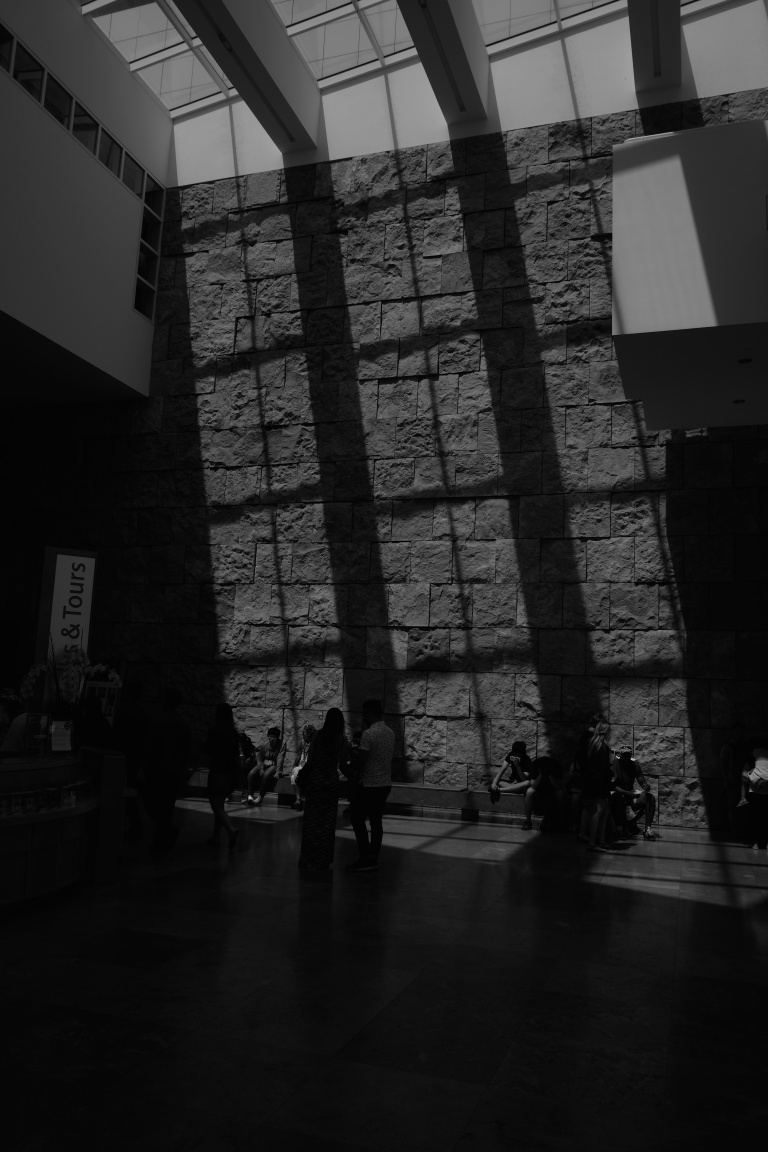 The Getty Museum is one of those destinations in Los Angeles tourists come to see. I played a tourist yesterday and went there.

I entered into the parking lot via a new automated system where one pays at the end of the visit and no interaction with a human is necessary. It cost $15.

A tram transports you to the top. You ride up in it, like a European, secure in its cleanliness, safety and recorded instructions.

The plazas and the sculptures and the architecture are still here, but the water had been turned off, in deference to the drought.

There were two exhibitions going on which I walked through quickly. One was full of drawings and paintings from the studio of Andrea del Sarto who lived in early 1500s Florence. Exquisitely wrought chalk portraits reminded me of what my father, who studied at the Art Institute in Chicago, used to aspire to.

“Light, Paper, Process: Reinventing Photography” was an exhibition of various experimental, often abstract, tactile printed photographs from dozens of artists. Blotches on one print read, “chromogenic print soaked in Rainbow Lake water.” Another showed concentric circles, still another was shadows, and another drops of black splotches.

These were selected by experts, curated by intelligentsia, and worked in their incomprehensible oddity to expel me quickly.

The rooms where the prints hung were crowded and hot. Suffocation soon got the better of me and I ran out into the light and air as I always do when I visit the Getty. 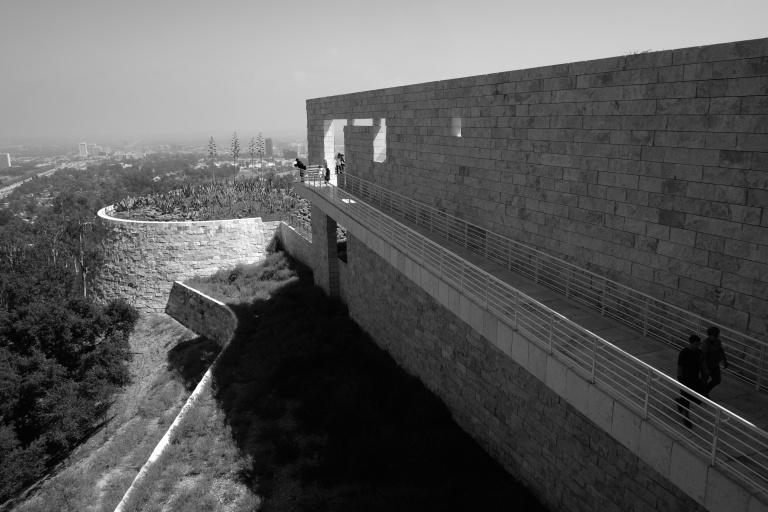 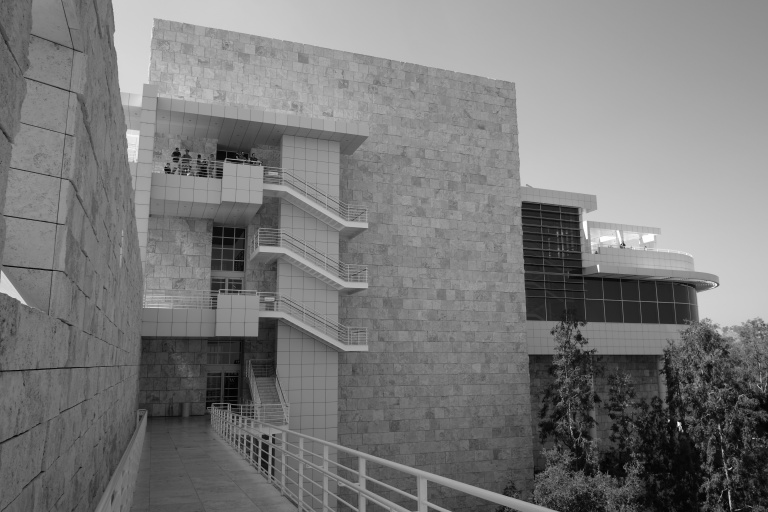 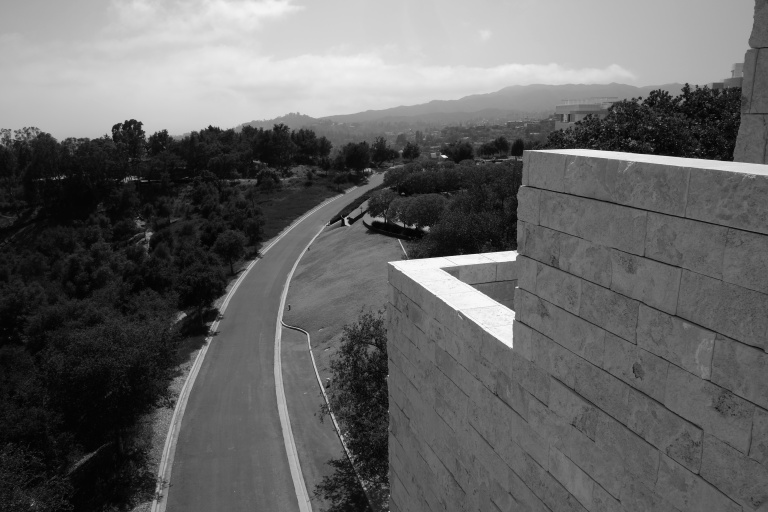 Better to me than seeing French tapestries in dark rooms is to walk outside and observe the light, line and textures of the Getty buildings and grounds.

The Getty design is now more than 20 years old, and just as a 1955 design looked old to 1975 eyes, so the architecture, with its squared and rectangular lines, seems dated in our present biomorphic era of computer generated forms and origami like skins.

Perched on top of the Sepulveda Pass in arrogant modesty, the buildings transformed the rural aura of the pass into something of a gaudy parade of wealth, equaled by the Skirball and its cold, pink, granite towers. 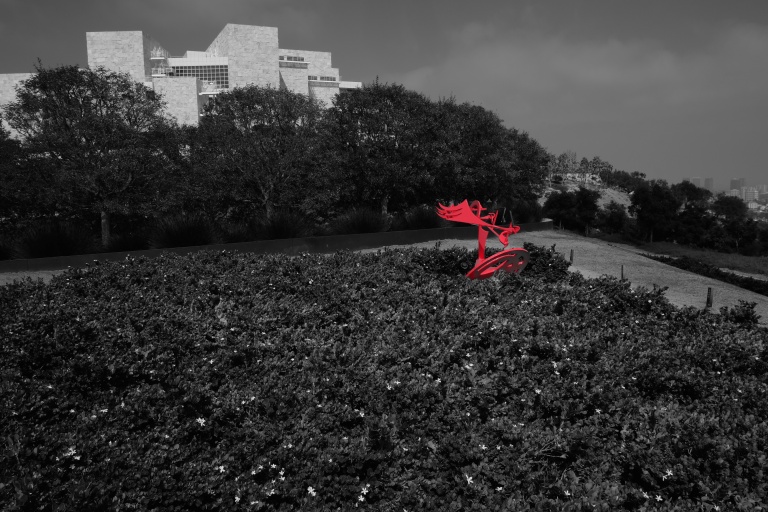 The $1.3 billion dollar Getty, whose funds might have worked to transform a gritty neighborhood in South Central into something better, was also used to plant thousands of oak trees along the hillsides. The lands around the museum are now verdant and shaded.

$1.3 billion was spent on the museum. And twenty years later people sleep on the streets of Los Angeles. But art is safe, secure and protected.

Such are our priorities.

But that is another discussion.

There are still, to the photographic eye, many lines and textures and shadows dancing all over the buildings and grounds of the Getty.

These are some I captured. 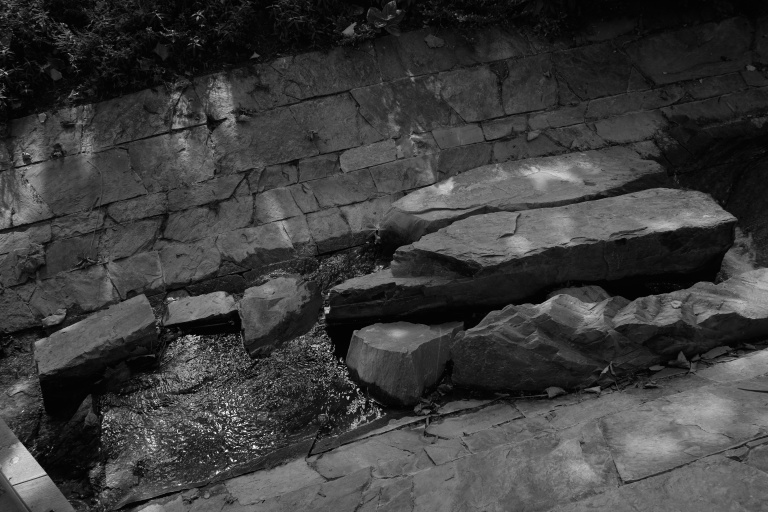 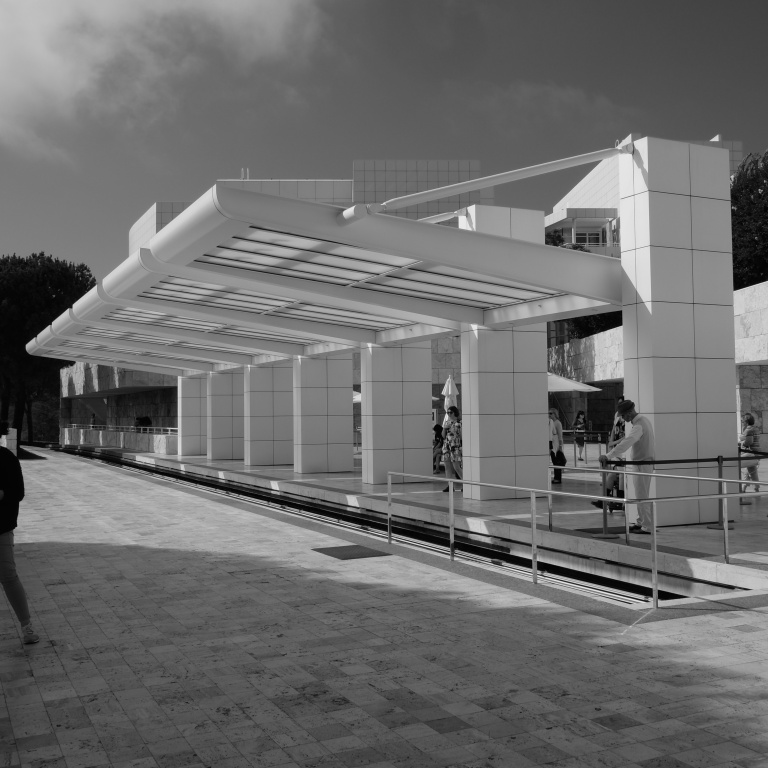 5 thoughts on “The Getty: Light, Line and Texture.”