On Saturday, February 20th, I lead a Noontime bike ride through historic Van Nuys sponsored by Connect the Dots and the Los Angeles Bicycle Coalition.

About 30 men and women rode with me, and then stopped as I spoke about old places, such as the original Van Nuys Library, the old post office, the high school, and the Katherine Avenue Historic District.

We had met at the Orange Line Metro near Aetna and Van Nuys Boulevard. I got there early about 11am, before the others arrived, and then I rode down Aetna.

Near Aetna and Tyrone, along the sidewalk, there is yet another impromptu community of tents, and people inhabiting them, set up on the sidewalk, in the sun. 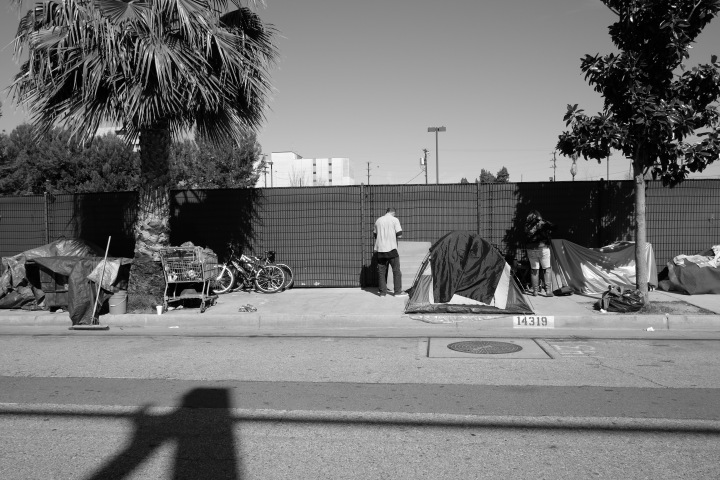 It is getting depressingly familiar to happen upon these encampments of people who live on the street, and it seems Los Angeles is emulating its old patterns of decentralization by dropping vagrancy in many areas, so that today’s homeless are just like 25 suburbs in search of a city. Skid Row is as near as your corner store.

Dressing behind his tent, and emerging in the sunshine, was compact Carlos, tattooed and athletic, who briefly spoke of growing up in the San Fernando Valley, attending Canoga Park High School (class of 1994) and being a champion cheerleader. He told me bad luck and bad decisions had put him out along the curb.

He later put on a shirt, and I saw him ride up on a child’s bike, the oft chosen ride for some adult Latinos. 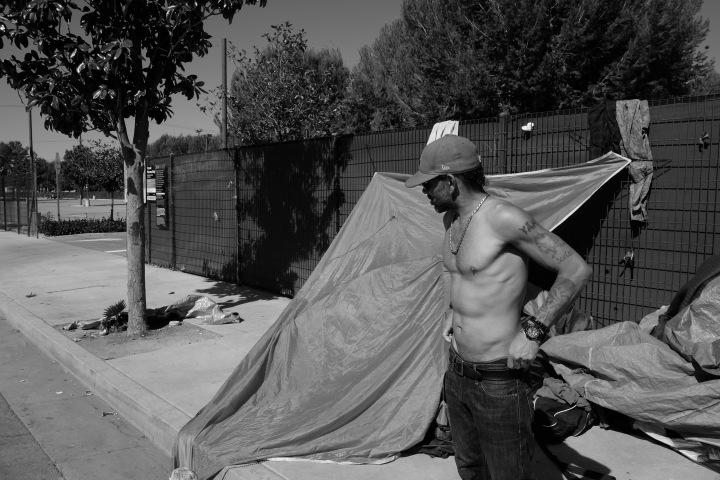 On the south side of Aetna, opposite the tenttown, stretching for the entire block from Van Nuys Boulevard to Tyrone, is a vast Department of Water and Power site otherwise called Valley Telecommunications Headquarters. 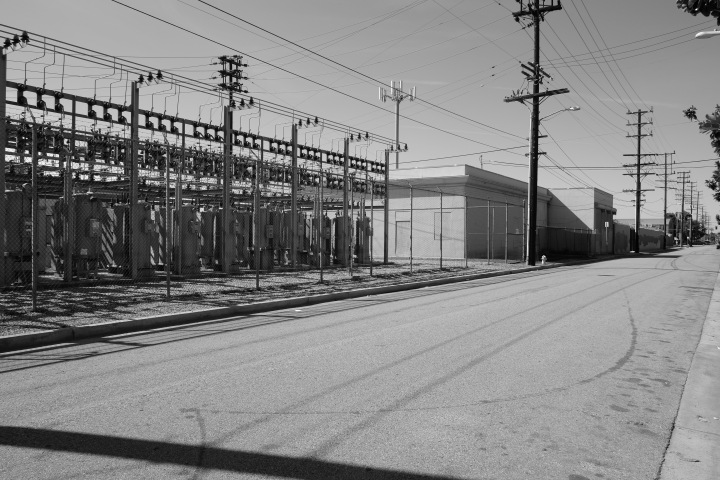 And thus the entire 105-year-old history of Van Nuys comes around full circle, because it is water and electricity that makes it possible to live here, and without those two utilities life itself would cease to exist, or at least modern life as we live it.

How ironic, how cruel, how barbaric, Los Angeles often acts. To have the know-how to bring water hundreds of miles from its source to fertilize civilization, and to electrify those dark nights and air condition those hot days; but still allow, in plain sight, men and women to exist, without water, plumbing and live current, in conditions suitable for squirrels and rats, and to scarcely offer a word of consolation to the victims.

Don’t you know the Mayor himself aspires to Great Streets in Los Angeles? In the not-so-distant future, Van Nuys Boulevard may become “great” according to the low standards of Los Angeles. Benches, bike lanes and decorative lampposts will be within sight of those individuals who defecate in sewers and walk Victory Boulevard screaming and dazed.

The fading glory of history pales next to our bright current circus of insanity.

But quiet indignation must step aside for loud boosterism.

Let the ride begin! We are on our way to a new tomorrow!

3 thoughts on “Living in Tents Along Aetna Street”