The United States had been attacked by Japan three months earlier, and this nation was now involved in a struggle against the formidable and murderous Axis powers: Germany, Japan and Italy.

Unknown to most of the world, Germany was also engaged in the world’s most advanced genocide against unarmed Jewish citizens of every nation in Europe.

America fought not only to win, but to free enslaved peoples.

When the war was over, Julius Blue, now married, made his way to Los Angeles and settled at 1655 E. 40th Place in South LA.

By 1948, Los Angeles was booming. Jobs, factories, housing: the state was on fire.

And up in Van Nuys, near the corner of Roscoe and Sepulveda, 392 single-family homes were under construction at “Allied Gardens.” Terms were very favorable for veterans. A $10,400 home with a $66.80 mortgage could be had for $400 down. 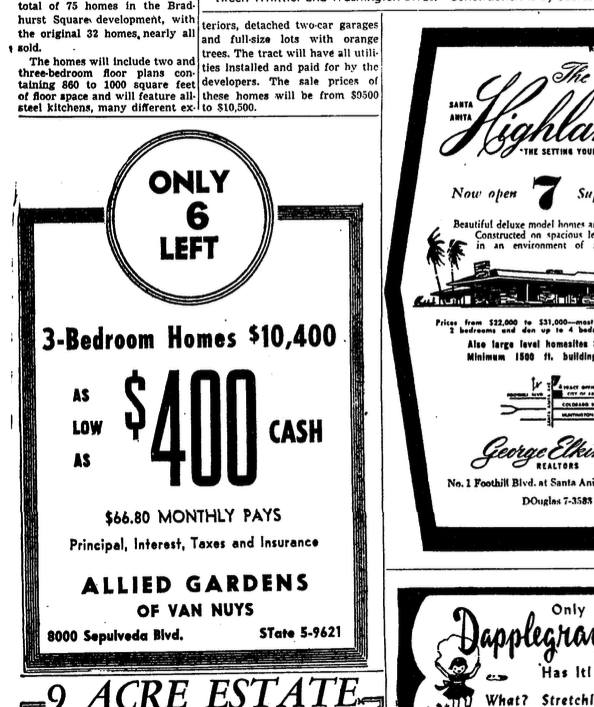 So one fine day in 1948, Julius Blue, his wife and her parents made their way up to Allied Gardens to look at the new homes.

When they got to the development, instead of being shown plans, the promoters handed the Blue Family a mimeographed document. It contained this description:

“No person whose blood is not entirely that of the Caucasian Race (and for the purposed of this paragraph no Japanese, Chinese, Mexican, Hindu or any persons of the Ethiopian, Indian or Mongolian races shall be deemed to be Caucasian) shall at any time live upon any of the lots in said Tract 15010”

Boltenbacher and Kelton, the builders, were allowed, at that time, to restrict purchasing of their homes to only whites. They were unapologetic about their open prejudices and discriminatory policies.

In that same year, 1948, the US Supreme Court ruled against race restrictive covenants.

If Mr. Blue had been able to buy a house at Roscoe and Sepulveda, he might have tried to apply for work at the brand new General Motors plant five minutes away at Van Nuys Boulevard north of Raymer.

But that plant also discriminated against black people. There were thousands of jobs, but only a handful of black workers, mostly janitors, employed in that factory.

These are some tales of old Los Angeles told by the LA Sentinel, a black-owned paper whose news coverage reported (and continues to report) stories often ignored by the LA Times and other white-owned media.

While it is amusing in our present time, and poetically just, to imagine that the multi-ethnic San Fernando Valley was once, by law and custom, reserved only for white buyers, it is still shocking to contemplate the blatant sadism, inhumanity and unfairness of that old time racism.

Julius Blue was not the only black man who had difficulty buying a home in Los Angeles. The August 12, 1948 LA Sentinel also had this headline:

Nat “King” Cole and his wife were planning on moving into Hancock Park but they were bitterly opposed by neighbors who feared that the dark-skinned entertainer and popular singer’s presence would reduce property values. 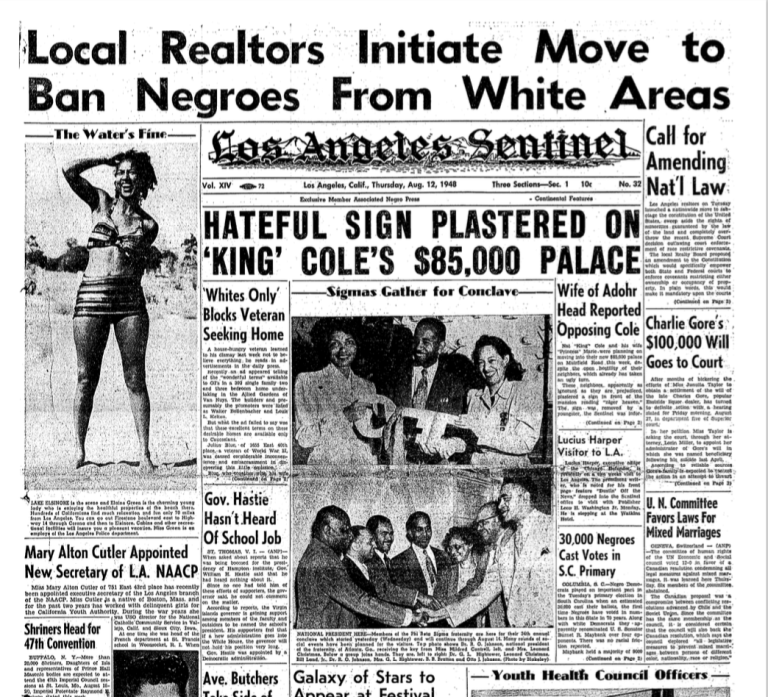 As a footnote, in 1987, Julius Blue, 65, was seriously wounded in a drive-by shooting in South Los Angeles.

I don’t know whether he survived.

But his story is the story of so many black men. How they managed to stay alive and keep their chins up high is truly astonishing and inspiring. And deeply distressing.

We Americans are the inheritors of an illogic and unreason that herds men and women into racial categories.

We Americans must uphold individual, not group, character as the only standard of moral judgment.

If we again buy into con-man ideas about group wide evil, we are going back in time to somewhere dark and ignorant, not pushing ahead into enlightenment and reason.