He has low self-esteem. He thinks he is too skinny, too short, too overlooked.

He blames his parents, near Raymer, for spawning him into the world from an obscure and ugly industrial spot near the concrete walled Los Angeles River.

On hot days, which are frequent, he told me hardly anyone drives up to his northernmost reaches. He looks at the homeless carts, the empty parking lots behind Target, and he thinks he is like an orphan among roads in Van Nuys and vicinity.

He told me he is jealous of Sepulveda named for an explorer, and of that “pompous” boulevard hosting such notables as Bevmo, OSH and LA Fitness. “What do I have except a couple junky liquor stores where they sell malt liquor? Sepulveda is arrogant. He has money and history and power. He was born near The Mission, holier than thou, and rams his way all through the San Fernando Valley and even has a pass named after him. He has Getty and Skirball and two Zankou Chickens. He gets to go all the way to LAX and beyond. He is well-travelled too!”

“I’m only 4.7 miles long. And people use me. They know I have no ramps to or from the 101 so they travel on me as a shortcut of necessity. They don’t really want to visit me. They would rather be on Van Nuys Bl.,” he said tearfully.

I told him I had respect for him, as he, evoked in me, a sweet nostalgia. 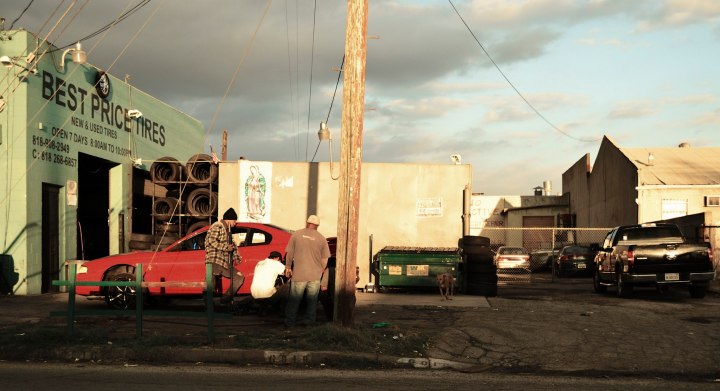 I said I liked Valley Builder’s Supply at Oxnard, especially the piles of sand and rock. And the place next door where they put bald tires on cars as a stray, three-legged, bandana-necked dog dances in the dust and dirt around the jacked-up vehicles. I tried to cheer him up and mentioned the braceros who gather for work everyday, smiling, rubbing their stomachs, itching for opportunity. “This is the real city. This is you, Kester!” I said.

I thought he would be thrilled at the two, new, white, glistening apartments on Kester between Delano and Erwin. “Big deal,” he said. “One of the buildings has just painted a big orange tongue on the front like a Pez dispenser. It’s like they want to make me look ridiculous instead of elegant. I’m always put into the low-class category!”

He said that even churches ignored him. La Iglesia En El Camino at Sherman Way just gives me a parking lot. And then there is that lousy self-service car wash across from the church. On Sepulveda, they have new, automatic car washes with flashing colored lights and lots of suds. On Kester, people still spray their cars by hand!”

He talked about his bitterness towards Van Nuys High School which turns its playing field bleachers away from him.

He ridiculed the remodeled Kester Palace apartments south of Victory as “refried beans” and “tacky.” 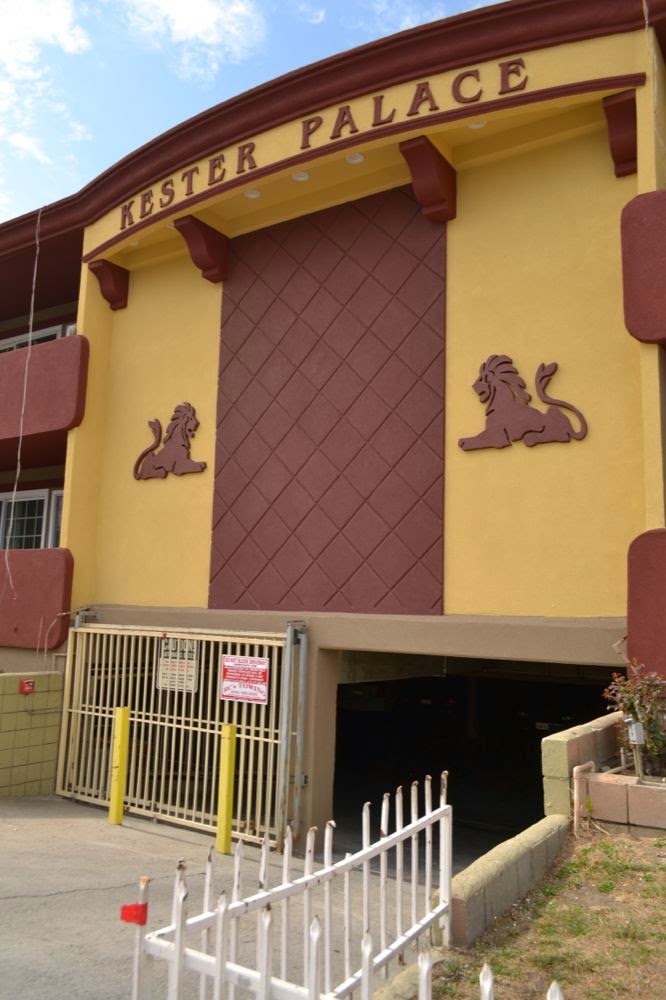 Most angrily he attacked the mini-mall on the NE corner of Victory where the trash and the shopping carts full of garbage are always left on the Kester side of the building.

I tried to change the subject.

“What about MacLeod Ale? I know it’s not on Kester but so many of its patrons drive down you to get there!” I said.

“Don’t mention MacLeod. They have it easy on Calvert Street. That street is twice as ugly as I am but they still get crowds of fans. Life is really unfair!” he said.

Then I had to, unfortunately, break the news to him that Metro is planning to demolish 58 buildings from Kester to Cedros along Aetna and Bessemer to accommodate a future light rail storage and maintenance yard.

“What? That’s crazy. Why would they destroy all those small businesses where people make a living? This is madness! Why does Van Nuys keep shooting itself in the foot? Do you mean to tell me that part of Kester will be taken away and devoted to floodlit rail yards right in the middle of old Van Nuys?”

“Yes. The great new transportation future of Van Nuys, with light rail, requires the dismemberment of one of its solid, dense, walkable districts. That is always how it works in Los Angeles. You must wipe out the old to create the new!”

He started to cry.

“It’s not part of my family but do you mean they will also knock down the old metal-sheeted, pitched roofed, fruit packing houses on Cedros and Calvert? Those go back to before WWII. Those are really lovely reminders of old Van Nuys,” he said.

“Yes. I’m afraid they will demolish those too,” I said. 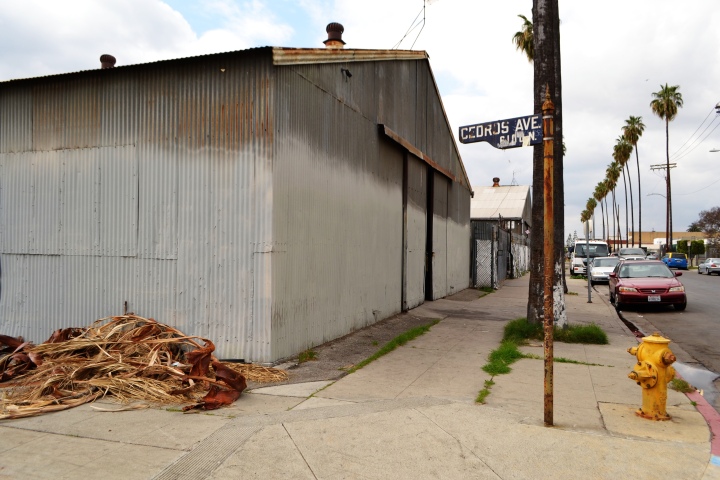 After spending time travelling, walking, and observing Kester, I understood that he was, truly, different from the louder, noisier, bigger, wider roads. He struggled to voice his own identity. He watched as less deserving streets around him got more and more action, and he slipped, quite often, into self-pity.

In other cities, perhaps in Italy or Mexico, a Kester might find love with his shadows and frumpiness. His shy virtues of walkability and modesty, independence and eccentricity, could give him a solid living and self-respect outside the US. Poets would write of Kester, painters would paint him. The monogram “BVN”, sprayed so artfully, so often, on the walls of Kester, would be stitched into the world’s finest garments.

But cruelly, in Los Angeles, in the San Fernando Valley, the majority stamps him only as Kester, the Underachiever. 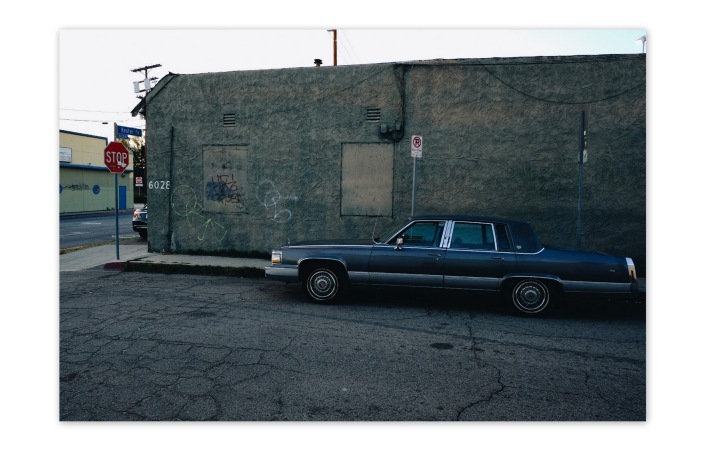 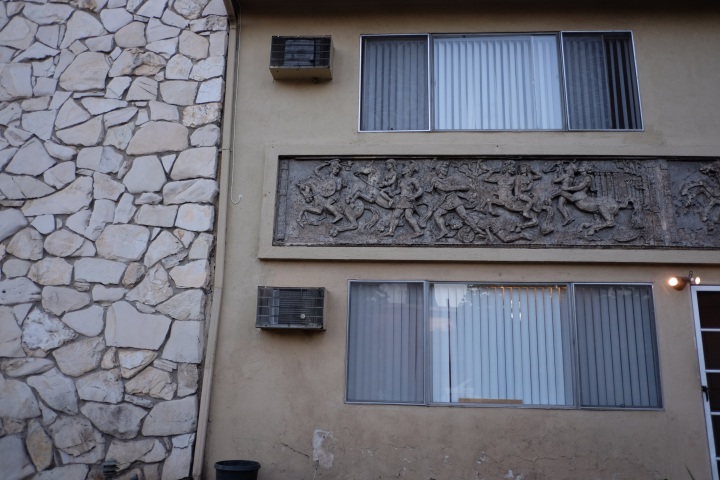 5 thoughts on “Kester, the Underachiever.”