For awhile now, residential modernism has been in charge in Los Angeles.

There was a period, roughly paralleling the 80s and 90s, when ersatz historical structures were the rage. Overdressed, highly embellished and gaudy.

But the stripped down box, the serious architect’s preferred style, is now the only way to build, especially on the west side of Los Angeles, where property is the most expensive, and every single ounce of concrete, glass and steel must pay homage to the gods of inconspicuous consumption.

The Box is King. Long live the Box!

On Memorial Day 2018, I walked from 5thand Pacific in Santa Monica down to Abbot Kinney, observing and photographing select buildings. 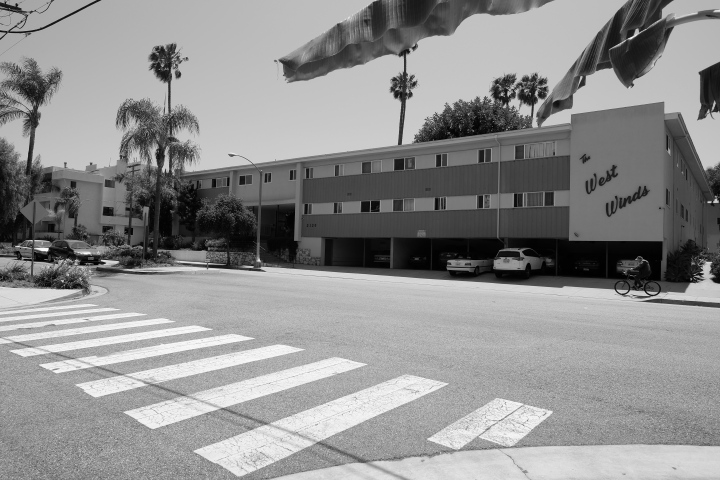 Whimsy from a cursive sign that provides a movie title sparkle to an otherwise dull structure. 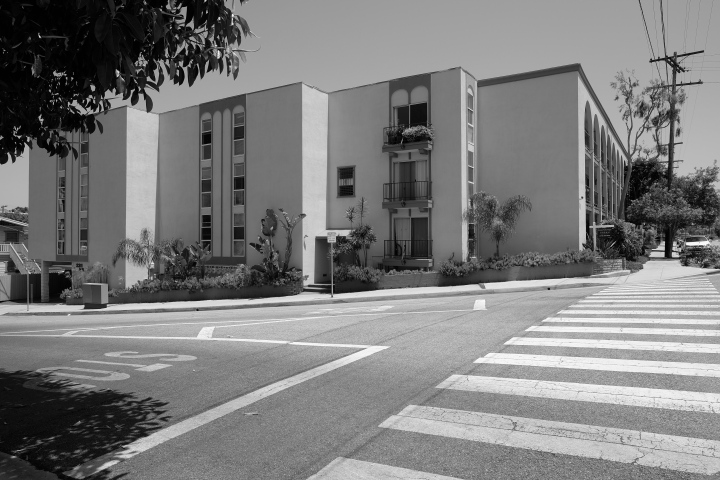 They charitably called it decorative modernism. It is a cheap way a developer dressed up his building with costume jewelry. 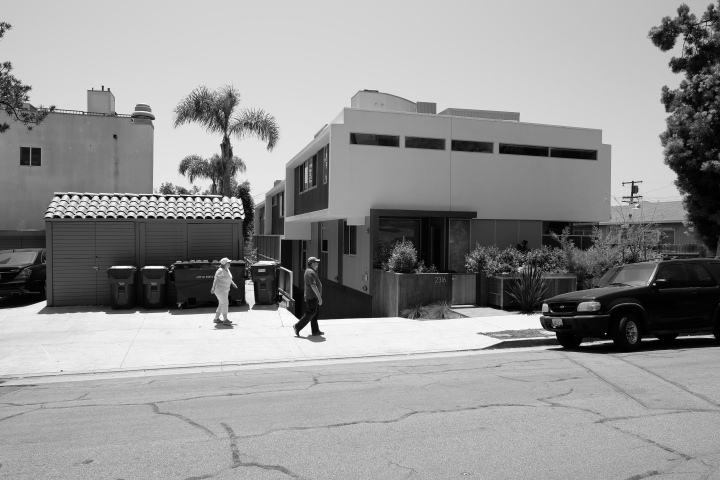 These are ultra-serious modernist condos designed by architect Robert Thibodeau. At least one unit sold for $2.6 million last year. They have all the emotionality and personality of a computer processor, but are of this moment in their sanitized, digital perfectionism, one that is scrupulously wired to accommodate residents who might command Alexa to send hot pizza and chilled Riesling by drone. 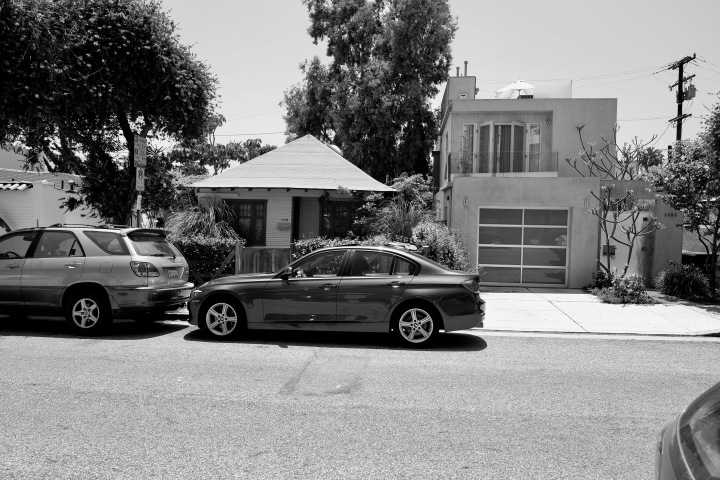 Already looking a bit dated with its ultra frozen metallic trim and smooth stucco, it compares awkwardly with its more relaxed and disheveled asphalt roofed neighbor next door. 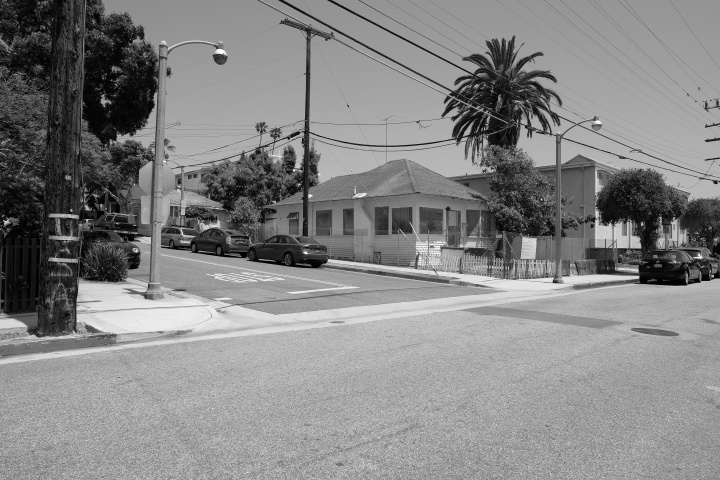 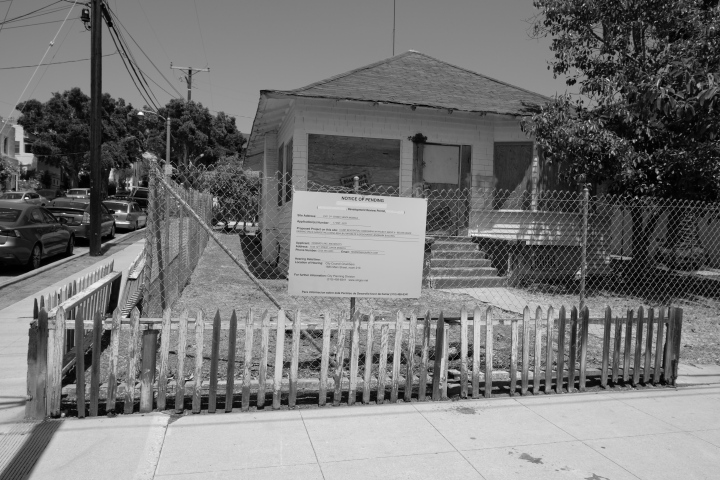 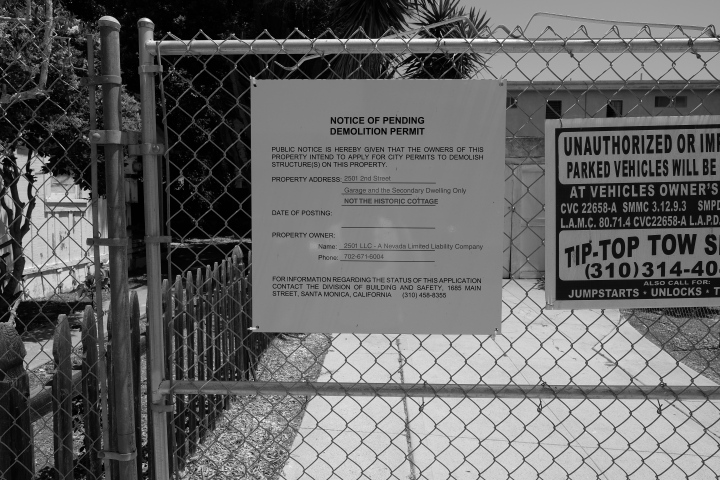 Fear not! This historic house has been under municipal evaluation/debate/conflict/litigation since at least 2010 and there are now plans to demolish only a back garage and guesthouse, and preserve the front structure. An official report by Santa Monica City said this property does not meet standards of preservation accorded to prominent architectural buildings.  A casual observer might disagree. 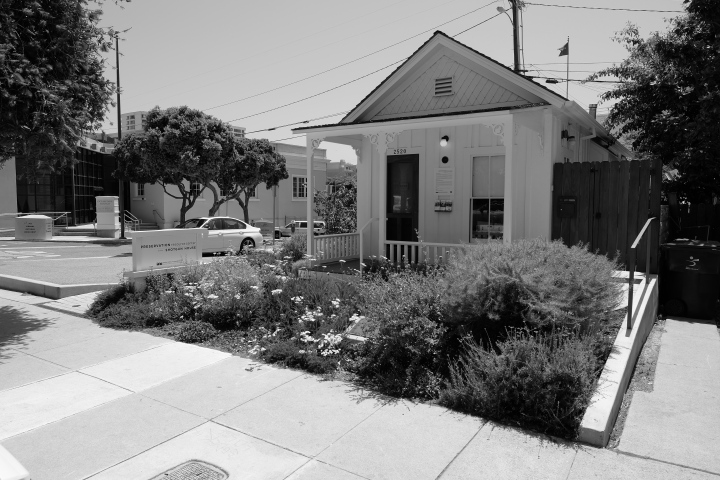 Imagine if Santa Monica were like Martha’s Vineyard, and little beach cottages with front porches were the norm?  2520 sits in exquisite preservation, next to a parking lot, but it is landscaped with wildflowers and drought-savvy plants. In its modesty and kindness, its gentle openness, it serves as an exception, not as the norm. 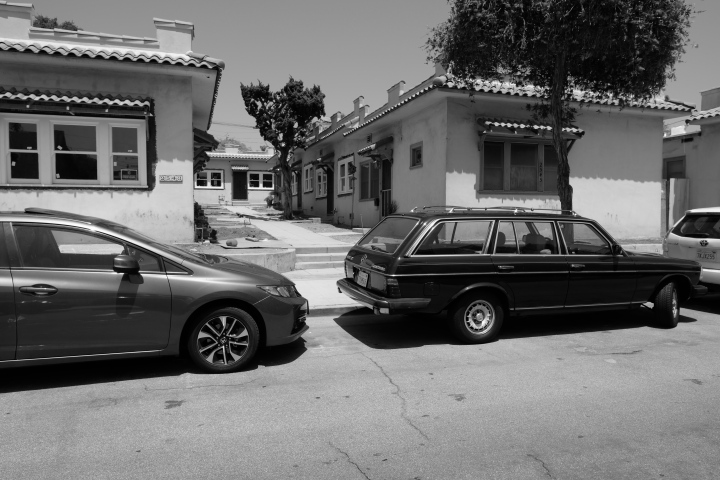 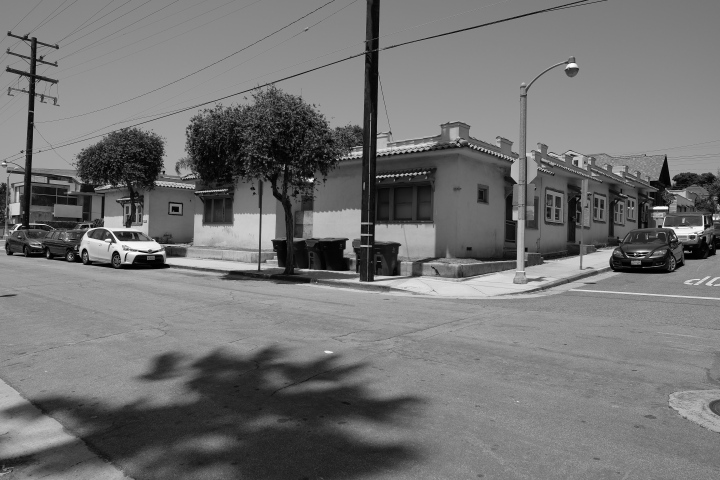 All over Southern California, the courtyard housing of the Early 20thCentury provided modest, enveloping, nurturing neighborhoods for new arrivals to the Golden State.  These archetypes made maximum use of land, but did so with landscaping and interior gardens. Unlike today’s crime paranoid structures, this building has windows and doors around the entire perimeter, inviting and friendly.  It is under renovation, no doubt destined to be something unaffordable. 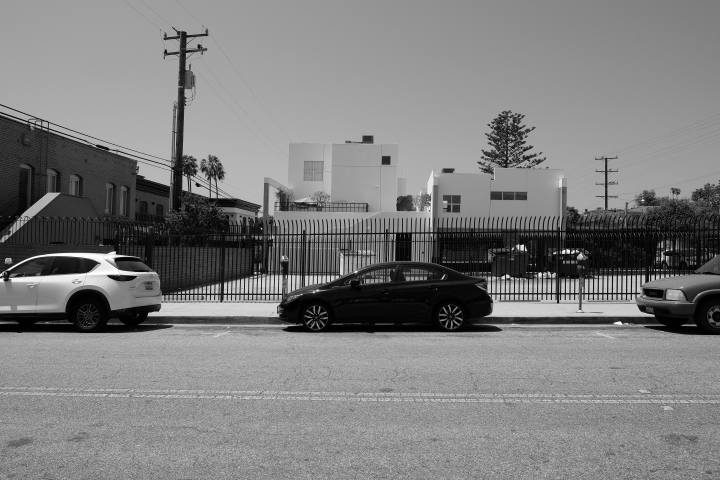 Now almost 30 years old,  this white, modernist, multi-family structure is best appreciated by observing it through steel security fencing and a parking lot. It has the mark of the late 1980s and early 90s in its square paned windows. Private, secretive, hidden, fortified, yet gleamingly bright and stripped down to essentials, this is what investment bankers, psychiatrists and plastic surgeons consider creative living. 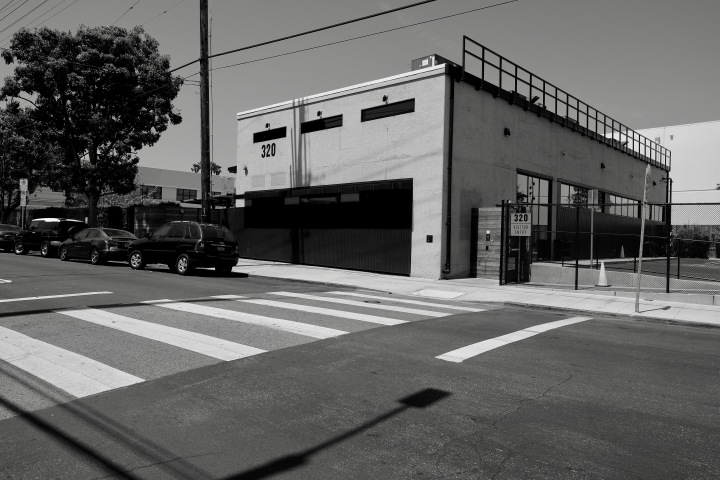 Google, Inc. is worth $600 billion and controls almost every aspect of every person’s life on the Planet Earth. It is more powerful than government, it is wealthier than 90% of all nations. Its infantile interface masks an incredibly complex and manipulative design meant to squeeze dollars out of any enterprise it wishes to.

It enslaves us by promising us ease. It erodes our individuality and uniqueness by herding us into categories assessed and rated by algorithms. It impregnates our dreams and deludes us into waking stupor.

Here is one of the buildings built by the pre-eminent monopoly of our time. It is a box: fortified, secured and undistinguished. Inside, no doubt, young employees bring dogs, tricycles, skateboards to work 18-hour-days, for 24 months, before they scooter over to another company in Silicon Beach.

In another moral riddle for our times, hundreds of homeless men and women sleep on the sidewalks just a few hundred feet away as if no money existed to rescue them from suffering. 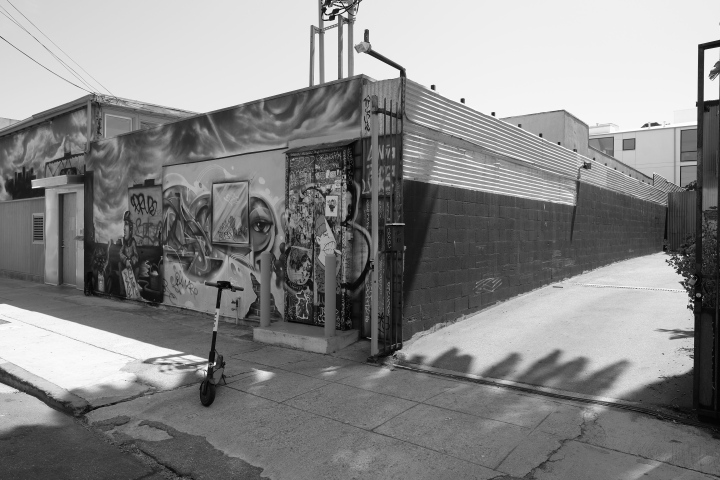 All over Venice, these motorized scooters, unlocked by app, rented by hour, provide another means of transportation which speeds one along without aerobic effort. 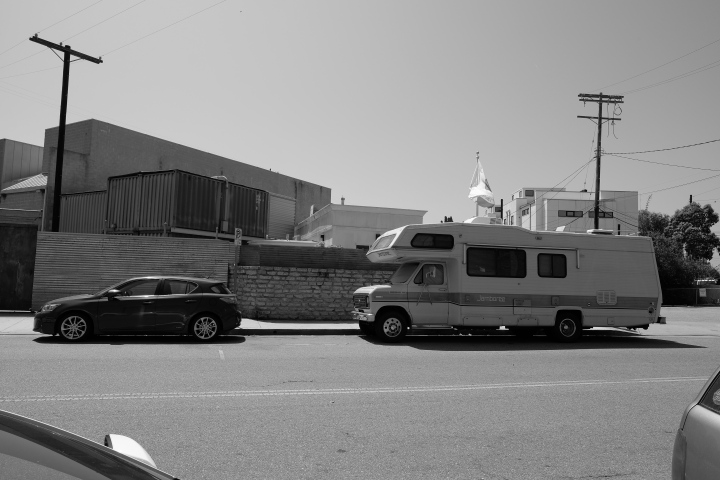 This RV is parked at Brooks and Electric. The California Flag flies behind it, fittingly, salutingly. No housing type has grown as fast as the parked recreational vehicle. 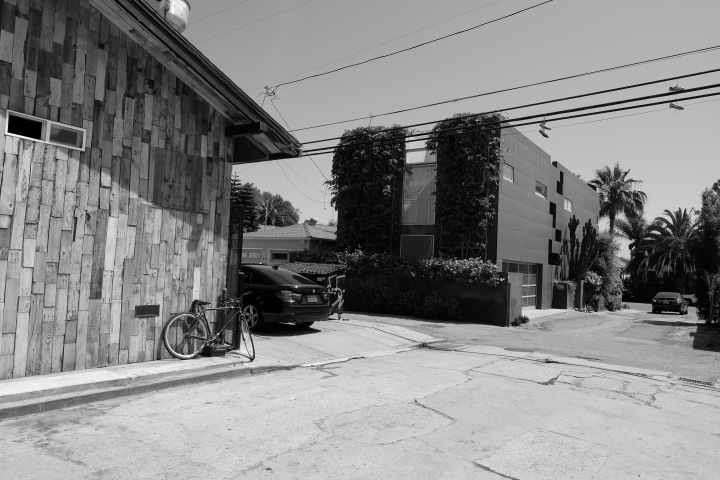 This home sits partly on a street and partly in an alley, both of which help solidify its sculptural presence. Dark, with variegated steel panels, and zig-zag cut outs, it is somewhat softened by vines. Lest it forget its bohemian surroundings, a reminder of drug dealers and gangs is provided by shoes hung on electrical wires nearby; as well as a tagged refuse container in the back alley. 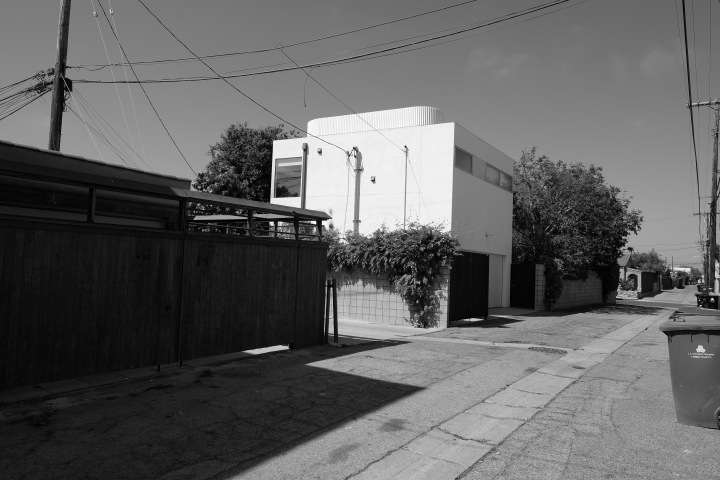 This is just the back guesthouse, but sparkles with a Teutonic crispness, like 1920s Bauhaus. And if this were Japan, there would be many houses just like this one, built along fastidiously maintained alleys. 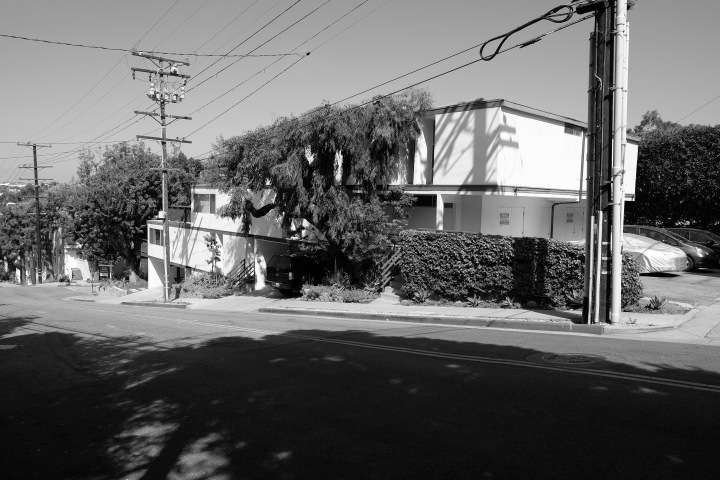 Only 50 years ago they were knocking down quaint neighborhoods in Santa Monica and erecting cheapo, stacked, shoe-boxed units like 420 Marine St. Almost mid-century modern, this late 60s dwelling shoves cars into the back alley, and squeezes one or two under the cantilevered second floor. An overgrown pepper tree grows like a beard to obscure a homely façade. 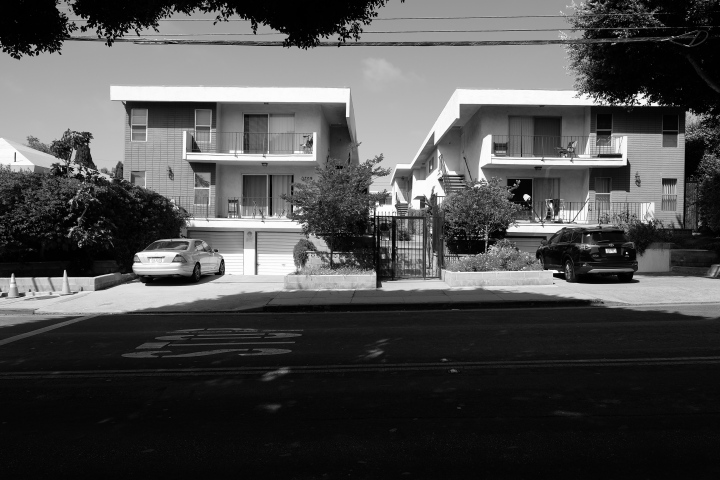 Still a rental, a recent ad offered a two-bedroom for $3,100 a month. Well-maintained from the exterior, it looks to have been upgraded with steel security gate, garage doors and energy-efficient windows. Considering its date of construction, it’s surprisingly un-ugly.

One thought on “Box Walk/Santa Monica.”