Some of the enormous, picturesque, and historic postcard collection amassed by Tommy Gelinas and his Valley Relics has passed through my hands.

The San Fernando Valley, only 100 years ago a largely agricultural area, dotted with newly established towns, became the fastest growing part of the United States in the 15 years after WWII.

Postcards from visitors who passed through here; visited olive groves, rode streetcars through vast planted lands, absorbed all the sunshine, boosterism and hucksterism of that time; radiate in words and pictures.

Around 1910, Pacific Electric advertised a 101-mile-long, one-day trolley trip for one dollar. “The Scenic Trolley Trip” visited 10 beaches and 8 cities.

“Paralleling the mountains from Los Angeles to the ocean, then 36 miles along the Seashore. Parlor Car; Reserved Seats, Competent Guides. FREE ATTRACTION-Admission to largest Aquarium on Pacific Coast; Ride on the LA Thomspon Scenic Railway at Venice; Admission to Camera Obscura, Santa Monica.”

And imagine, men in suits and women in long dresses riding all day in wool coats, felt and feather hats, with many layers of undergarments, not even an ankle exposed.

Thirty or so years later, the Tower Motor Hotel at 10980 Ventura Blvd in Studio City was smartly streamlined with gas pumps in front, steam heat and air-cooled rooms. 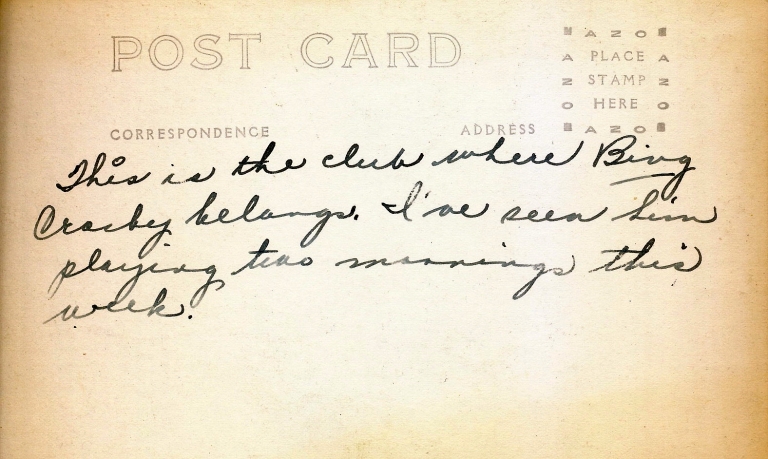 Bing Crosby, who lived in Toluca Lake, was the most successful singer of the 1930s. A postcard sent from a fan who visited Lakeside Golf Club near Mr. Crosby’s home wrote: “I’ve seen him playing two mornings this week.”

A 1930s view of Van Nuys, along Sylvan Street, towards the Valley Municipal Building, shows diagonally parked cars and a “Safeway” store.

On another postcard, showing the Encino Country Club, a Model T is parked under a shady oak in a verdant landscape of hills and orange trees.

It may be too much to extrapolate truth and fact from these postcards. They were advertisements for businesses, meant to promote and sell.

But my heart tells me that Encino, Van Nuys and the rest of the Southland were magical back then.